The location was Alaska. The film was Days of My Youth. Cody Townsend was standing at the top of a ferocious couloir, staring down at a straight line with no clear route and no visible exit.

Months later, the footage of the American riding the now famous ‘Crack’ was released, and we mean it when we say that it went absolutely viral. We’re talking cat playing a keyboard or ‘what colour is this white and gold dress’ kind of viral.

The line was named the best of the year, Townsend himself said it was the scariest thing he had ever ridden, and it racked up over 8 million hits on YouTube. 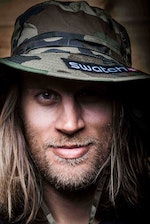 Cody ended up on national television numerous times. The only time you normally see a pro skier get that kind of attention is during the Winter Olympics, and even then they have to share the limelight with curlers and ice-skaters and all sorts of cross-country, mixed-alpine lugers.

All in all, across all of the different players on the internet, the line now has more than 50 million views to its name. It’s safe to say Cody didn’t quite expect that when he was dropping in.

“It was pretty amazing,” he said, speaking exclusively to Mpora. “What we do is so insular. It’s a part of the skiing community and it’s really skiing for skiers, so to see so much of the world get psyched up and wowed by it was kind of crazy.

“I actually got a report that said it had 53 million hits worldwide. I was on NBC, Fox News, CNN… I was like ‘hey mum, I’m going to be on CNN in 30 minutes, check it out!’

“I  felt like people would obviously like that line and you think that it’ll be popular in the skiing community, but when I woke up and it was on the Today show, the national morning show, it was like ‘okaaay, things have changed’!”

The line didn’t come without its controversies though. Shortly after it dropped, it emerged that Travis Rice had also taken on the Crack – before Cody – while filming for his much-anticipated sequel to Red Bull blockbuster Art of Flight.

Travis posted a transcript of a phone call he subsequently had with Cody on his website, insisting that while he was “momentarily pissed” when he first saw the video, he “soon got his ego in check” and congratulated Cody on the line.

The skier continued: “I think if that was any other sport except skiing and snowboarding there would’ve been a lot of jealousy, but Travis called me out of the blue and was like ‘I’m so stoked. I’m a big fan of yours’! That was awesome. I really think it’s cool that we both got to share one of the most unique lines in the world. 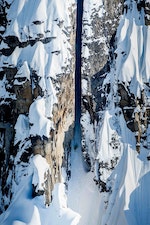 “We actually found out some other guy skied it way before both of us, but it’s not about who’s doing it first or any of that other stuff. You ski stuff because you see it as a personal challenge. That was a dream of mine and it happened – and it just so happened to be the same year Travis rode it too!”

After setting the bar so high with his award-winning line then, what’s next for Cody Townsend? On to bigger and badder lines and gnarlier challenges? It may surprise many to hear that that’s not what the skier has planned.

Townsend, who is married to fellow pro-skier Elyse Saugstad, has seen two friends – Timy Dutton and JP Auclair – die in action in the past year, and he believes that it’s dangerous to buy into the mindset that every skier must continue to try and raise the bar.

“It’s a different feeling this year,” he admitted. “I’ve lost a lot of friends doing this and that’s partly why I want to change paths.

“I just went out and set this bar for gnarliness, and everything has been so focused on that line and how I would top that, but that’s a dangerous way to think. It had been a dream of mine for many years but now I’ve got some new dreams that aren’t in that same line of gnarlier, gnarlier, gnarlier.

“Everyone thinks it’s about that and that you get recognition and get all this stuff, but that shit sucks. It’s more about the dream and being out skiing with your friends. That’s why I’ve always done this. The chance to challenge yourself is part of it, but it’s not the part.

“There’s no reason to top that just to top that! It’s dangerous. I’d worked for years to get to that point.”

So, what will be the focus of Mr. Townsend’s new project? He’s certainly not packing in the skiing altogether, that’s for sure, but he also has plans to take on new challenges and aim for new horizons, specifically in the world of mountaineering.

While Cody has little specific experience in the sport, he will no doubt be able to translate a lot of his skills from the slopes to the venture, and he’s excited about the prospect of taking on something new.

He continued: “I haven’t done it at all before, but that’s why it’s really cool. There’s this whole other avenue of the sport that I’ve never had a chance to do. It’s almost like starting over.

“The past 10 years have been focused on this thing, then I won all these awards, the line goes viral, and I’m like ‘Cool. New thing now!’

“I’m working on a new project this year focusing on new ways of skiing and different ways to explore the mountain. It’s a lot more about adventure, having more of a natural experience as oppose to chasing lines so heavily. It shows the other feelings you get out there, which is just that it’s so special to be in those places that no one goes to.

Don’t worry then, the most famous skier of the past twelve months is still going to be shredding on the big screen in the next few years.

There’ll just be an abundance of stunning views and maybe a few Bear Grylls moments in between the lines. On our part, we have no problem with that at all. Bring on more from the man behind one of the best ski lines we’ve seen in years.

Switzerland’s Best Kept Secret: Skiing in the Shadow of the Murder Wall

article awe inspiration longform pride surprise The Big Interview
We use cookies on our website to give you the most relevant experience by remembering your preferences and repeat visits. By clicking “Accept All”, you consent to the use of ALL the cookies. However, you may visit "Cookie Settings" to provide a controlled consent.
Cookie SettingsAccept All
Manage consent