December 2015 was a write-off in all but a few resorts in the Alps. Warm, sunny and with a distinct lack of neige. But that was then and January brought a massive and welcome change. In just seven days white goods were deposited, up to two and a half metres deep in some spots. And it seemed that another metre and a half was on the way.

Numbers like this whip mountain resort social media marketing teams into a frenzy, and cause office-bound inhabitants of the British flatlands like myself a great deal of distraction through what ought to be a working week. Should I be getting on with my end of year reports, or would I be better served refreshing the eight-or-so weather forecast tabs I have open at the top of my screen every 12 minutes, and compiling a spreadsheet of all plausible flight combos to Valhalla? The answer was B – the second one – of course!

Should I be getting on with my end of year reports, or would I be better served refreshing the eight-or-so weather forecast tabs I have open at the top of my screen every 12 minutes?

There are a variety of different weather modelling systems, and various popular and lesser-known snow forecast sites are based on different ones, or combinations of two or more. The serial optimist might shop around until he finds a forecast that tells him what he wants to see. The thinking man does the same, but to build a consensus and try to get a general picture of what’s likely to happen.

Mountains are a notoriously mercurial milieu, meteorologically speaking. But if every website you pore over is telling you that a boatload of snow has just fallen and that the next few days will make the closing scene in Scarface look like child’s play, then it’s time to come to terms with the fact that you will be taking either Friday or Monday off and you won’t be available for your Sunday league side this weekend.

Broad sites like snow-forecast.com are a useful starting point to give you a reasonable picture, but weathertoski.co.uk and particularly wepowder.com are especially useful for fine tuning where specifically to go at short notice to get the best conditions. The latter’s MO being very much directing the enthusiasm-rich but geographical knowledge-poor skier or snowboarder to the best snow that’s going at any given time in the Alps. “Meteo Morris” offers a detailed analysis of what to expect in terms of existing and expected snow, wind, temperature, weather and pointers on possible avalanche danger, all of which combine to produce a list of recommended resorts for the coming few days.

For the weekend in question in mid-January the North-western Alps (Northern France, Western Switzerland) had been and would continue getting hardest hammered, so we needed somewhere within easy reach of Geneva, with a wealth of forested terrain (lower avalanche danger, better visibility), ideally not unduly pricey, and preferably sans people. Easily reached from a major airport or city but not awash with Scandinavians (or similar) in the lift-line with big beards and bigger skis is easier than it sounds, so sometimes an extra half-hour is a worthy drive.

I’d heard one too many stories to be ignored of exactly such a place. Little-known, but much-loved by those that do, the die was cast and we were heading to Arêches-Beaufort, a place of peace, powder, pillows, cracking cheese, and very few humans!

Carlsberg don’t do Friday nights, but if they did, they’d probably include arriving in Arêches-Beaufort at midnight to find this delightful old church being tickled by a bunch of white stuff pouring from the sky. The Saturday morning lift line comprised of a dog and an absent owner. Or perhaps the powder skis and airbag belonged to this magnificent mountain canine who was his own master. Either way, 50% of the classic man + best friend equation was nowhere to be seen, and our furry compadre made for a cheerful companion as we waited for the lift to open. Try as we did though, he remained tight-lipped about the location of the best powder-stashes on the hill. Note to self: next time you’re in Arêches, take an ample supply of Bonios with which to befriend the locals.

A plethora of steep chutes through the forest directly off the lift and nobody here you say? Could be OK I guess!

We had a chance encounter with some of the locals having lunch whilst lapping back to the lift. Other indigenous species spotted at the same eatery the following day included a pair of splendid llamas. They weren’t forthcoming with photo opportunities however, leading me to speculate that they weren’t locals at all, and that perhaps their paperwork wasn’t in order.

Spot our writer hidden in the powder…

The classic Citroen might not be an obvious choice of vehicle in the mountains during a snowstorm, but then very little about Arêches would fall into the “obvious” category.

Heading back up on lap two the clouds parted momentarily and we were granted a glimpse of the higher ground. Arêches has a stellar rep with local ski-tourers and splitboarders and it wasn’t hard to see why. We’d be staying below the treeline this time, although the second note to self from the weekend read: “must come back when clear and sunny”…

Our next lift took us into a zone absolutely brimming with pillows and ultra-fun mini-golf terrain. 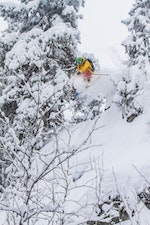 Something of a rare breed, on occasion we would spot a Yellow-Breasted Chrigl flying through the trees. Founder of becjaunebrewery.com in Morzine, Chrigl skis powder and makes premium beer. If you look up “winning” in the dictionary, you may well find a picture of Chrigl.

Kene (our photographer) owns echomag.co.uk, a hard-hitting weekly news title in Val d’Isère in winter, runs a beach bar in Hossegor in summer and takes pictures of models in his spare time. Kene can also be found in the dictionary, just next to the picture of Chrigl, under “see also”.

Not a noted après-ski destination, the preferred location for a beer in the evening in Arêches is Chez Dédé. Part stereotypical French cafe, part wild-west saloon, it’s the only bar in town and purveys a fine range of local beers and choice Beaufort-infused saucisson. Opening hours are very much at Dédé’s discretion and dictated entirely by prevailing snow conditions.

Having had two days in Arêches’ enchanting forest, there was a suggestion that the storm might abate for the third and final day of the trip. With more lift-accessed terrain above the treeline, we reloaded the voitures and headed over to nearby La Clusaz, incubation territory to a host of freeski and snowboard royalty, including that arch internet-breaker Candide Thovex. 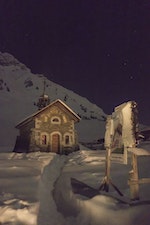 The road over the stunning Col des Aravis passes by this little chapel. Which on this occasion was handy. With so much recent snow, the ascent to the Col was quite an experience, and I’m certain we wouldn’t have made it down the other side an into La Clusaz had it not been for a well-worded and heartfelt prayer/sacrificial snorkel combo offered to the Gods of mountain travel by Chipie at the altar on the way through.

We joined up with Verbier Xtreme winner, freeride OG and all-around badass Seb Michaud, who pretty swiftly showed us what he, and La Clusaz, were about, sending any and every air in sight with impeccable execution, generally giving the impression on returning to earth that he had never in fact left. We looked on with notepad and biro in hand, scribbling in bold the third note to self and belated New Year’s resolution: “BE MORE LIKE SEB MICHAUD!!” 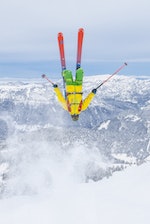 Seb’s colourmatch game is on point, as indeed are his backflips.

The mountainscapes of the Aravis range are among the most distinctive in the Alps. Huge limestome slabs jutting up in wacky diagonals pleasing both to the eye and to the freerider.

In case we were in any doubt, Seb gave us a clear illustration of what it’s like to be in the right place in the right time with the right people, sending a lofty air into the classic La Clusaz line, La Combe de Bellachat, as a parting shot.

Our D.I.Y last-minute weekend powder mission to the French Alps had been a roaring success. You should try it one day too.

• Fly to Geneva with a number of airlines, including Easyjet and Swiss from all over Europe. Hiring a car is normally the best bet for a weekend attack, but if solo altibus.com has bus transfers to a range of French resorts near Geneva.

• In Arêches-Beaufort we stayed in the simple and charming Hotel Pontcellamont, 30m from the Grand Mont chair.

• In La Clusaz we stayed at Hotel Christiania is bang in the centre of town, 50m from the main lifts and serves excellent beer at the bar.

• Guides: to keep you safe, and show you to the best stashes. Use Nicolas Blanc

• For comprehensive info on all French mountains resorts, go to france-montagnes.com

To read the rest of Mpora’s D.I.Y Issue head here

inspiration
We use cookies on our website to give you the most relevant experience by remembering your preferences and repeat visits. By clicking “Accept All”, you consent to the use of ALL the cookies. However, you may visit "Cookie Settings" to provide a controlled consent.
Cookie SettingsAccept All
Manage consent