“Basically, I got the idea for a very large, inclined wind tunnel that could have flying homo sapiens in it,” e-mails Anton Westman of ‘Indoor Wingsuit Flying’, a new Stockholm-based project which offers exactly what it says on the tin.

There’s not much basic about it though. When the centre opens its doors in September 2017 it will be the first of its kind in the world. Nobody else has even attempted to make such a thing a reality.

Thankfully Anton is available to explain the concept further on the phone.

“We were inspired by biologists at Lund University [in Sweden],” he says. “They do these amazing studies with birds and bats there in a small tilted wind tunnel. I saw what they were doing over there and already knew about LT1, and that gave me the idea.”

The referred to ‘LT1’ is a low-speed wind tunnel created in the 1930s to produce research, which would be used to build and improve the Swedish air force.

LT1 cannot produce supersonic wind, but it can produce extremely powerful forces of wind, up to 80m/s or 288 km/h. It had been largely neglected since the turn of the century, and Anton didn’t catch wind of it until 2012.

The original plan was to reconstruct LT1 as the first vertical wind tunnel in Sweden, for use in skydiving. In 2015 though, after reading research from Lund, he began to think it may be possible to instead make the first wingsuiting tunnel in the world.

Why? Well, the obvious reason for starters – to try and provide the first real training and practise platform for the most dangerous sport in the world.

“Fatality rates for wingsuiting are so high – even higher than the rates for cancer. And I know people who have been killed while wingsuiting as well, which is an obvious motivation [to try and make it safer].

“I have a lot of skydiving experience and I used to even compete in skydiving but I have never been in a wingsuit [outside] because I have seen what can happen.

“This would give a way to train and help people minimise miscalculations. Obviously there will always be more skills required and dangers when you involve a parachute and hazards like cliffs but this provides desirable conditions for safe wingsuit flight training and could lead to new flight techniques.”

Anton himself is a PhD and postdoc in aerospace medicine at Karolinska Institutet and MD in anaesthesiology at Karolinska Sjukhuset. He has several years of leading innovation, develop and research, and has been part of the progression of skydiving as a sport since the 1990s.

He has been awarded the highest distinction by the World Air Sports Federation for his work in the safety of skydiving over the past two decades.

Anton is one of the self-dubbed “Crazy Ones”; the four who initially came up with and began to implement the idea for the inclined wind tunnel. And they do seem rather well-named. The other guys are just as accomplished as Anton, including Peter Georén, the aerodynamic expert responsible for turning the dream into a reality.

“I was just the crazy guy who came up with the idea; a huge inclined-wind tunnel like a ski slope where many people can fly at once,” says Anton. “Peter was able to implement it.”

Georén is a PhD from the Royal Institute of Technology in Stockholm and heads up the institute’s Integrated Transport and Research lab. He was one of the pioneering masters of skydiving in Sweden.

Peter created the incline on the horizontal wind tunnel, modifying it and creating the world first technology, pending patent, which allows control of the airflow and makes Indoor Wingsuiting possible.

The team soon got Croatian wingsuit pioneer Robert Pecnik of Phoenix-Fly involved in what became a secretive project to develop a prototype of their plan.

“Robert Pecnik has developed wingsuits since the 1990s and really made wingsuiting what it is today. He laughed when we first told him about the idea because he said nobody had even thought about it before, but he also said theoretically there was no reason why it shouldn’t work.

“He’s been working with us to design the tunnel and the safety system, which he is really interested in.

“There had to be a safety system so that if you fly away from the centre you don’t go too far – you can still move up and down and left and right – but if you go too far you’ll get directed back into centre. More experienced flyers can fly freely but still without danger of hitting the walls.

“I did the first flight without a safety system in the prototype tunnel myself. It was May 22 and I remember it well. If it did go wrong then it would have been my neck and my own fault.

“I remember sitting there with my helmet for a while and getting pretty nervous. But I was able to fly having never been wingsuiting before. I really flew for about 40 seconds and that was the first free-sustained flight taking off and landing softly at will on the same spot on the floor.” 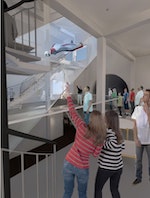 Anton describes his flight as like “doing something deeply unnormal in quite a normal environment”, referring to the fact that you can fly in winds of just 20 or 30m/s in the tunnel, though it can go much higher.

This means that you can stand in the tunnel before take-off or after landing and it would feel more like a strong wind than the full on storm of a vertical skydiving chamber, which is designed to push you up into the air rather than help you glide through it.

The work that lead up to this achievement was of course monumental, and largely done in secret – “only us and our wives knew. We told a lot of white lies about where we were going and what we were doing to our friends” – but the team have now been successful in creating an indoor wingsuit experience that will let children as young as seven sample the thrill of flight.

And if all goes to plan, this might just be the start of a huge growth in the popularity of wingsuiting. Anton goes as far as mentioning the sport in the same sentence as the Olympics.

Anton continued: “We were surprised about how we were able to fly at first, and even more surprised other people who had never flown at all were able to fly with guidance. People with no experience could be trained in 20 minutes to fly like someone with hundreds of jumps.

“What opens in September will be a final version, at least eight metres long and four and a half metres wide. And we want to add a race slalom option as well. The World Air Sports Federation is interested in the project.

“Air sports have been trying to get into the Olympics for a long time but have not been able to for a lot of reasons; weather, conditions, consistency.

“They thought it might happen with the vertical skydiving wind tunnels but it didn’t; they use too much energy and need a high tower. This may be me dreaming and may never happen but our tunnel is more eco-friendly and easier to build in a shopping mall or an Olympic village. Maybe one day…”

Olympics or not, it’s likely that Anton and his team have just changed the future of wingsuiting forever.

We Speak to Aaron Durogati: The Planet Earth 2 Paraglider Who Got THAT Golden Eagle Shot