Snowboarding has always had a youth fetish. This made sense in the 1980s when it grew from its rebel roots as a super-rad alternative to skiing, yet almost 40 years later board graphics and the broader scene still seem intent on targeting teenage boys, or at the very least celebrating notional ones.

This youth-obsession has been amplified in recent years with the rise of the super grom, often showcased in viral video edits of ever-younger kids slaying their local park or snow dome. Don’t get me wrong, these clips are almost always impressive, but the most inspiring snowboarder I’ve encountered in a long time wasn’t a 17-month old ripper but a 70-something pensioner called Donald Whishaw.

Whishaw had his first lesson last year aged 73 with Tammy Esten from the popular snowboard school Mint in Morzine. I ask what made him want to start snowboarding while in his 70s? He says: “My older son started kiteboarding and it raised my interest. I thought: ‘I wonder if I could do that on snow’. So about eight years ago I bought a snowboard and some boots on eBay. We tend to drive [when we go] skiing so we can take the extra kit, but I didn’t use it much for six years.”

Perhaps due to what had happened the one time he did go out, with his wife skiing beside him. He says: “I’d gone down about 200 yards with my legs burning and leant against a fence, which I thought would support me but it didn’t. I went underneath it and fell about the height of a house, but luckily I wasn’t hurt at all. [Though] it took me about an hour and a half to get out.”

Was his wife worried? He laughs: “No she was looking down from the top, rather bored.”

Then last year in Morzine, Whishaw continues: “A young lad called William, I guess he was 10, more or less accused me of being chicken. And I said: ‘Well teach me!’ I’m regular and he’s goofy so we were able to go down a few times, then suddenly I felt a tap on my shoulder and it was Tammy [Esten] from Mint Snowboarding. She said: ‘You look as if you’d like to learn, would you like a lesson?’ I paused and she said: ‘Tomorrow, I’ll meet you at the ski lift!’”

He went back to his chalet but none of his friends believed the story. So the next day they all followed him to the lift. But Esten was there as promised and took Whishaw off to the nursery slopes. He says: “She told me what I call obvious things at the beginning and I thought this is going to be laborious, but it wasn’t, there’s not a single word of advice that Tammy gave me that wasn’t valuable.”

“You tend to stoop as you get older, and I remember her voice echoing across from the other side of the slope: ‘Hips forward Donald!’”

What good tips did she give him? “You tend to stoop as you get older, and you can’t straighten up in the same way for that glorious forward turn that you see young kids doing. And I remember her voice echoing across from the other side of the slope: ‘Hips forward Donald!’ And it really made a difference. If someone is totally confident and reasonably near you, and [you’re] trying to get down and be obedient and she’s there to give you commands and get your weight organised, then it’s absolutely fantastic.”

“I wish I’d met someone like Tammy just a few years earlier, I’d have given up skiing altogether. Once I’m moving and I feel my body shape is right, I feel like I can snowboard all day.” 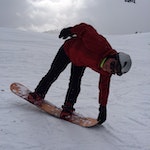 Did he do any tricks? “I bent down and picked up the back of the board. There’s probably a technical word for it.” A tailpress!

How did it make him feel? “I don’t know what it is but it runs through your blood. Even though someone eight or 10 could do it without even knowing they’ve done it, at my age you know you’ve done it.”

I ask Esten whether she thinks Whishaw found the experience more rewarding than a 20 or 30-something learner might? She says: “I think you never lose the buzz of learning something new, but the older you get the less likely you are to take up things. It’s so rare, so when you do take up things you get an even bigger buzz. Donald has skied but he was definitely drawn to the sense of freedom you get from snowboarding compared to skiing. A sensation anyone who’s spent time on a board understands. He proves you don’t need to be young to get that sensation.”

“I think you never lose the buzz of learning something new, but the older you get the less likely you are to take up things… so when you do take up things you get an even bigger buzz.”

And was it was uniquely hard to teach Whishaw given his age? She says: “For him it was a lack of flexibility that made it hard for him. I told him to do yoga.” Whishaw had told me he didn’t like yoga “as there wasn’t enough return for the energy and the money.” Not enough buzz for this thrill-seeker.

Esten continues: “He needs to pay real attention to how he’s standing, his posture is so important, as just being a milli-fraction off balance could cause him to catch an edge, and as his teacher I wanted to protect him from injury. Especially as older bones can be more brittle.”

I ask Whishaw if he worries more about falling over, because he’s older? He tells me getting up is harder. “By the end I was able to stand up from sitting down after a fall, via my knees. It became almost natural but in the first hour I didn’t think I’d ever get there. It’s just getting old muscles who didn’t know they were there [working again]. Once my brain had located them I could do it.”

“But yes it’s a longer and harder fall than skiing. I’m used to falling on skis, it’s easier and they come off, but with this business I haven’t really learnt how to fall.” Though Whishaw does mention his time parachuting, inspired by his adult sons, who are both in the military, did help. “We used to practise our parachute landing falls and funnily enough it does come in useful.”

“It’s just getting old muscles who didn’t know they were there [working again]. Once my brain had located them I could do it.”

Until recently when it got too expensive, he used to parachute regularly with his wife. He still sails, paraglides, kitesurfs, windsurfs, plays squash, runs between two and eight miles a day, swims in British seas in winter without a wetsuit and his wife has just bought a skateboard.

I ask Whishaw if he was always active and sporty? “No not at all. I worked in the week, running a factory, and mowed the lawn at the weekends of our typical Victorian house. I did nothing until I was 42. The very first thing we did as a family with exercise was Jane Fonda movies. We did them before school everyday for a whole term. Then we started short runs, pathetic really 200 yards and we thought we’d done a run.”

“In 1962 he and his wife had polka-danced all the way along the seafront one night with friends. All were sober at the time.”

“When our kids left home, we looked at each other and thought why don’t we do something. Gloucester had a plastic ski slope, the kids had been on it a couple of times, and we thought why don’t we get round to doing this? That was the beginning aged 42 and I’m now 74. We also started windsurfing and used to do a race around Hayling Island as a family and that sort of thing brought us into being energetic.”

Is it important you do these things together with your wife? “Yes I’ve always tried to have relationships like that.” I’d mentioned I live in Brighton and he tells me that in 1962 he and his wife had polka-danced all the way along the seafront one night with friends. All were sober at the time. “We always had that kind of thing in us I suppose.” 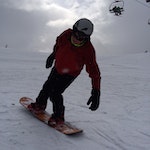 Scientists are constantly extolling the physical benefits of old people keeping active but does he think there are mental benefits too? “Yes. They are absolutely massive. Alzheimer’s hasn’t reached me yet I don’t think but so many people talk about counting down from 100 to 0 in 7s and so on to exercise your brain, and that can be fun if you’re doing it competitively. But to be standing on a snowboard getting my body weight right, feeling comfortable, showing off a little, even if there’s nobody around, yes that gets the brain stimulated.”

“I’m trying to start a new business which is totally different from anything I’ve ever done before. People think I’m crazy because of my age but whenever I’ve done an activity, such as snowboarding or even running, I come back with 10 times the mental agility I had before. My job of choice would be to persuade older people to stop being old and do something energetic.”

“My job of choice would be to persuade older people to stop being old and do something energetic.”

“When you get to my age, and I’m expecting to make 100, it really is phenomenal to look back at these little things you’ve done in your life. I’m not just saying tick them off for the sake of ticking them off but they were great at their time.”

It isn’t just snowboarding that lionises youth over old age, pretty much all of society does the same. But it’s lovely to think that the sensation of snowboarding has an ageless appeal. And even more awesome to hear such a positive and aspirational take on old age. If my twilight years can be anywhere near as fun as Donald Whishaw’s all I can say is bring them on.

To read the rest of the Superhuman issue head here

And to find out more about Mint Snowboarding head here

Made Of Stone | Tackling The Stigma Of Snowboarding & Skiing While Deaf

This Super Weird Gadget Means You Can Chill Out In Any Tree You Want...

The CanopyStair is the easiest way ever to climb a tree….

This Super Weird Gadget Means You Can Chill Out In Any Tree You Want...

As if triathlons weren't hard enough already without deers jumping out at the participants.

The World Mountain Biking Bog Snorkelling Championship might sound ridiculous... but it exists, and we've got the footage

"I really couldn't believe I was alive, let alone not paralysed..."

After the Gold Rush | What Do Locals Think Now the Olympic Circus Has Left Town?

Team GB might have smashed it, but how to their Brazilian hosts feel about the Olympics? Our man in Rio investigates

Rio 2016 | What Do Locals Think Now the Olympic Circus Has Left Town?