“I remember getting up and having breakfast in the chalet that morning. I was acting as an assistant coach in the park that week and that was our routine. But I don’t remember riding up to the lip of the jump or anything. And then the next thing I remember was…”

At this point Charlie Elmore’s voice trails off, and it’s not the slightly dodgy Skype connection from Sweden that’s making her pause.

“It’s… it’s not one thing I remember.” She continues. “It was lights, snippets, stuff slowly working its way back into my consciousness.”

She was in a coma, and no-one was sure she’d ever wake up.

It’s perhaps not surprising that Charlie’s memory is hazy. On that fateful morning the 26-year-old snowboard instructor had hit a jump in Mayrhofen’s Penken Park, smacked her head hard and sustained a massive brain injury. Although she didn’t know it, those snippets were the first signs of life after 10 days in a coma.

A coma that no-one was sure she’d ever wake up from.

Traumatic brain injury (TBI) like Charlie’s first became something of a cause celebre in the snowsports community in 2009 when Kevin Pearce, the American Olympic hopeful viewed as Shaun White’s only serious rival for the gold medal, injured himself badly in a training accident.

But while that incident and his remarkable recovery were widely documented, notably in the brilliant 2013 film The Crash Reel, there is still surprisingly little out there about the longer term effects of living with TBI. And it’s this that a new documentary following Charlie and other TBI patients (Me & My New Brain – BBC Three, 9pm, Tuesday 21st of July) looks to examine.

Like Pearce, Charlie made a remarkable physical recovery. Initially she was unable to do anything for herself, including talk. At one point the documentary shows her sitting with her mother reading a Facebook message that describes how doctors “cleaned [her] up a bit… and put [her] tongue back inside [her] mouth.”

There’s also a powerful moment in the TBI ward where Charlie was treated where the specialist Dr Ronnie Behr, looking at the ten beds says: “The statistics say of these ten patients, two are about to die, two will make a very good recovery and six patients will make some recovery but survive with significant disability. That’s the crude numbers.”

Yet despite the odds being stacked against Charlie, such was her determination that within six weeks of the accident she was taking her first steps and after just three months of rehab, she was released from hospital. By the following winter, she was back on her snowboard again. Charlie tells the film-makers “I was like ‘cool, I’m snowboarding again! That’s the end.”

But as the documentary makes clear, when it comes to brain injuries, the physical recovery is only the beginning. There are long-term, lasting effects that aren’t always instantly obvious to the patient, their family or their friends.

Those who’ve sustained brain injuries often struggle to understand people as well as they used to, and their perception of what is “normal” social behaviour can be altered. There are scenes that show Charlie taking a series of psychiatric tests in which she struggles to identify the emotions people are feeling in a series of videos.

Another patient featured in the film, Callum Beaton, believes his personality has been altered since the car accident that caused his TBI. This can have massive consequences for their friendships, relationships and their own emotional well-being.

A year before Charlie’s injury Tai Lester, who also features in the documentary, had a similar accident while skiing on a piste in the same resort. Flown by helicopter to the very same Innsbruck hospital as Charlie, she also spent a prolonged period of time in a coma – in her case 16 days.

My friends sat at the end of my bed, freaking out, because their friend Tai did not look like Tai anymore.

“I remember seeing two of my friends sat at the end of my bed, freaking out,” she tells Mpora. “Because their friend Tai did not look like Tai anymore.” But although things looked bleak at first, Tai has since made an incredible recovery, having had to completely re-learn how to walk and talk.

However, like Charlie she’s found things became arguably more difficult after her release from hospital.

“In hospital you have nurses, doctors, your friends, they come in and visit you. But when you leave everyone thinks it’s a sign that ‘she’s better now, she’s good.’ But with a brain injury it’s not, it’s quite the opposite.

“That’s when shit gets real. And that’s when you need everyone more than ever.”

Tai explains that this can be way more difficult than it sounds. “[Your friends] might want to be there but they don’t understand what’s going on because in their mind you should be better now.

“So why are you acting this way? They say: ‘Why is she doing this?’ So you lose a lot of friends,” she says, with impressive matter-of-factness.

The documentary includes a heart-wrenching scene where Charlie explains how, once she’d physically recovered, she sent thank you notes to “a couple of hundred” people for their “ongoing support” in the immediate aftermath of the accident.

“If you were going to write cards now, how many would you write?” asks the interviewer.

The lack of understanding of her ongoing problems left Charlie feeling “isolated and miserable”  for a long time. “The [long term] effects have been at times horrendous,” she tells Mpora. And it’s not just friendships that that can prove difficult for those with TBI.

“A hundred per cent, no doubt whatsoever it has held me back from jobs,” says Tai.

“There’s a three-year gap on my CV so if I leave it out people think ‘was she just fucking around?’ but if you put it in people just see ‘accident, injury, brain, head’ and decide ‘I don’t want to spend money on her if she’s gonna wig out, or be constantly going off for appointments. Employers don’t understand what a head injury is so they don’t give you the time of day.”

Employers don’t understand what a head injury is so they don’t give you the time of day.

When she first returned to the mountains, Charlie faced similar difficulties. She started working as a snowboard instructor again but as her father tells the documentary makers, she often found herself “bottom of the list, so to speak.”

And if friends and employers look askance at those who’ve sustained brain injuries, it can be even harder with potential partners.

“Relationships are the number one hardest thing,” says Tai. “The last thing you want to do is to make some guy you fancy think you might not be ‘normal’ or whatever. You don’t want to go into a relationship and have to explain everything.”

But the danger is that “they don’t understand what’s going on so they start to freak out and walk away”.

Charlie puts it even more bluntly: “I had resigned myself off from ever meeting anyone ever again. Up until a few months ago I thought ‘no-one’s ever going to put up with me.’”

Unsurprisingly such problems with friends, jobs and relationships can quickly spiral into depression, a process Charlie refers to in the film as “the circle of shit”.

For her part, Tai says: “When a lot of my friends had isolated me it was difficult for me to be open and honest so I just put on this whole front.

“Like being all happy, ‘Tai’s good’, all that. But then when I went home, that was the real Tai – sad and struggling with depression. And even suicidal.”

But although the long term effects of such brutal skiing and snowboarding accidents sound like they can be indescribably bleak, the documentary is not an unrelentingly negative one.

In fact, it ends on a positive note with Charlie embarking on a career helping disabled skiers and snowboarders. 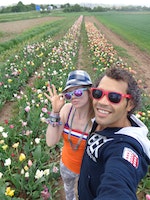 Since Me & My New Brain was filmed, things have got brighter still for Charlie. She has a new boyfriend, a snow lover like her.

Together they have started the GBOT2018 campaign, designing and selling hoodies based on the one the doctors cut off Charlie at the time of her accident, which she has since stitched back together. The profits will go towards funding Paralympian and Invictus Games athletes.

Both Charlie and Tai will continue to feel the after-effects of those fateful days in the Austrian Alps for the rest of their lives. As Tai puts it: “It’s not like when you break your arm and it recovers in six months and that’s it. This is an ongoing thing. And for me it’s been six years now. I’ll always be recovering. It’s a trip.”

But the hugely positive approach they are taking to their long-term recovery, and the way they’ve learned to love their “new brains” is an inspiration for anyone who’s ever stepped on skis or a snowboard.

Me & My New Brain is on BBC Three at 9pm Tonight (Tuesday 21st July) and will be available on BBC iPlayer after broadcast.

article fear inspiration longform
We use cookies on our website to give you the most relevant experience by remembering your preferences and repeat visits. By clicking “Accept All”, you consent to the use of ALL the cookies. However, you may visit "Cookie Settings" to provide a controlled consent.
Cookie SettingsAccept All
Manage consent