We’ve joined forces with Nikon, who’ve just released the brand new KeyMission 360 Degree action camera, to create a series which focusses on the missions that drive those at the cutting edge of action sports. Here, Mpora’s editor-in-chief Tristan interviews Neil McNab, a snowboarder who’s made it his life’s mission to help people appreciate mountain environments – and explore them safely.

Neil McNab is not a man who is easily panicked. As the only British snowboard guide to hold the coveted UIAGM guiding qualification (awarded by the Union Internationale des Associations de Guides de Montagne), he’s made it his life’s mission to study the mountains and help people to enjoy them safely. But two years ago, while guiding a group on the Kamchatka peninsula, a fantastical land of incredible snow and active volcanoes in the far east of Russia, McNab found himself, if not panicking, then definitely beginning to get worried.

“One of the guys [I was guiding] went off the line I had ridden and he triggered an avalanche. It came down this huge gully, and it caught two of the team. It went down for about a kilometre in length – it was massive – and both of the guys got buried.”

“I thought I’d lost someone to an avalanche, and it was just the worst feeling ever.”

“We found one guy really quickly but the other one I was searching for on my own for a while, following the avalanche down, and I just wasn’t getting a signal. I thought: ‘I think I might have missed him?’ Eventually I picked up his signal and I found him but for an instant…” McNab’s voice tails off as he remembers the incident. “I thought I’d lost someone, and it was just the worst feeling ever.”

Thankfully, Neil says such close shaves are rare. It’s a testament to his skill and experience that in all his many years working as a guide he’s only been involved in a handful of avalanche incidents, and none as close as that one in Kamchatka. “I like to think that if I’m at a place where I’m going to ride then I’ve listened to the signs and I’ve studied the lines and I won’t take risks.”

Of course the UIAGM program, a seriously challenging four-year course that is difficult enough to get onto, let alone complete, has played a large part in making Neil the exceptionally safe and competent guide he is today. But looking back at his life and career, he could almost have been born to help people explore mountains safely. “I’ve always been a climber,” he says speaking from his home in the mountain sports Mecca of Chamonix, France. “I started climbing when I was six [and] I grew up in the UK rock climbing in the Peak District and around Yorkshire. And then I skied as well, just from being in the mountains really.” Having qualified as a ski instructor in the 80s, he then began to develop a love of the then-young sport of snowboarding, and moved out to the French Alps full time in 1987. “I’ve lived out here a long time,” he chuckles.

“My involvement in the mountains through climbing always influenced me as a rider – eventually I followed that back into the mountains.”

Once he started riding every day in the winter, Neil’s snowboarding career quickly took off. “I competed on the World Cup circuit for about ten years,” he says. “I started off racing because racing was the big thing back then, then moved into boardercross and freestyle.” But as he grew older, the lure of the backcountry – and the high alpine environments he’d learned to love through climbing – grew stronger. “My involvement in the mountains through climbing always influenced me as a rider, so eventually I just followed that back into the mountains.”

If embarking on the UIAGM course seemed like a natural next step for Neil, it was far from an easy one. “Just to get on the scheme you need to be a pretty accomplished climber,” he explains, “with an in-depth list of all the climbs you’ve done.” But it’s not just about climbing. “It covers everything, so there’s a rock climbing element to it, there’s an ice climbing element, there’s ski touring, freeride skiing, mountaineering – it covers pretty much everything in the mountains beyond the pistes really. So to get on the course you need to be quite an accomplished mountain man.”

“In France particularly it’s quite hard to get on because you get so many people applying. So you have to do a kind of iron man challenge to eliminate the masses.” A week’s worth of gruelling tests, including “an ice climbing competition, a mountain running competition and […] freeride skiing” amongst other disciplines, whittles down the roughly 400 individuals who apply each year to just 30 or 40 – just ten per cent are allowed to start the training, never mind completing it. The four-year course which follows this assessment saw Neil undergoing extensive training and tests in a whole multitude of disciplines while his instructors pitched curveballs at him. “They’d throw spanners in the works the whole time. You’d be climbing with clients and the assessor would say: ‘Right, he’s broken his leg now. What are you going to do?’” The idea is to train aspiring guides to handle every situation. “It’s what the job is all about really,” says Neil, “and it does set you up well”.

Many people would find mastering the skills necessary to pass this sort of assessment in a multitude of disciplines tricky enough. But for Neil there was an added complication. Being in France, the whole course was taught in French, “and as a non-native speaker of French I found that quite hard”.

“Neil’s excited about the 360 camera’s potential for scoping lines: ‘If someone [had already] ridden a face with a 360 camera you’d get a good idea of what the line’s like.’”

“My French got better throughout the course, but I often found that by the time I’d thought of what I could say to join in a conversation, the topic had moved on. So I ended up not really saying a lot.” Initially he worried that this might affect his results, “but then one day I heard the assessors talking. He said: ‘McNab, he doesn’t say a lot but you don’t have to worry about him.’

“I kind of got this good reputation for being quietly confident, so I decided I’d go with that, but it wasn’t a deliberate thing, I was just struggling to talk!” Neil chuckles at the memory, but it’s clear that the route to the guiding qualification was a difficult one. It’s equally clear however that this gruff Yorkshireman wasn’t going to let anything – whether it be difficult physical tasks or tricky language learning – come between him and his goal.

Now that he’s achieved the coveted qualification, Neil spends his time leading expeditions all over the world. He’s particularly fond of far-flung destinations and exploring new areas where no-one has ridden before. As well as Kamchatka, he’s guided in places as remote as Greenland. He’s been running trips to an area in the north east of the island (known, oddly enough, as Liverpool Land) for the past few seasons. “There’s no-one there. So I take a group of snowboarders in, we camp and then it’s riding every day, and it’s all first descents.”

Having recently tried the Nikon KeyMission 360 camera, Neil’s excited about its potential for scoping out new slopes like the ones in Greenland. “If you were looking at a line that you wanted to ride and someone [had already] ridden it with a 360 camera you’d get a good idea of what the line’s like.” He believes it could be an excellent way to let snowboarders – and clients especially – know what they’re in for when approaching a new line.

As well as the right tools, guiding clients on slopes that have never been ridden before and weathering storms miles from civilisation require all of Neil’s skills and experience. But to hear him talk about it, it’s obvious that this is what he loves. Being in the mountains and helping others appreciate them as he does is less of a job for Neil than a calling, a mission.

“Helping others appreciate mountains as he does is less of a job for Neil than a calling, a mission.”

“Basically I want to give people the best experience in the mountains, that’s always been my goal,” he says. But these days there’s an added environmental element to what he does too. Living in Chamonix, where the Mer de Glace glacier is visibly shrinking year by year, it’s impossible to avoid noticing the impact of climate change, and it’s something Neil believes he can help educate people about. “I want to influence people to appreciate the mountains and appreciate the environment out there,” he says.

“I think we’re kind of at a crisis point with the planet. And [although] snowboarding might not be the most green or environmentally friendly sport, if you can appreciate the value that you gain from the mountains, you can take that back into your everyday life to make you more responsible.” 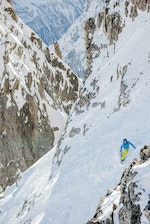 “If we can get people to do that, to gain a respect from the mountains then maybe we will get something back from snowboarding. I’d like to think so anyway.” He chuckles again. Neil’s under no illusions that getting people snowboarding will single-handedly solve the environmental crisis, but there’s no doubt that it can definitely play its part. Keeping people safe in the mountains and keeping mountains safe from the worst instincts of people – as missions go, it’s an admirable one.

Adventure I Am On A Mission

Aside from the trance-like clanging of cowbells, we didn’t hear a sound or see a soul during the whole trip

A breakdown of the two major types of long distance bicycle travel.

The push for the progression of women's cycling is on. But a lot must change before it can flourish...

Good Reads | 10 Of The Best Books About Skiing

10 Of The Best Books About Skiing

Fake News? | Footage Of Two Australians Atop An Exploding Volcano Goes Viral…But Is It A Hoax?

Footage of two Australians on top of an exploding volcano goes viral... But is it a hoax?

This Footage Of Two Australians Cheating Death On A Volcano Is Going Viral... But Is It A Hoax?