“A secret spot,” is the surprisingly swift – and somewhat curt – reply from the enigmatic Mathias Andrä to a group of Italian ski tourers who ask our destination. We are in the train station of Saint Petersburg, ready to board a “twenty-something-hour” train ride towards Murmansk, and this group seems to annoy our guide. It’s obvious that Mathias is not in the sharing industry.

Or perhaps his hangover explains it. Our arrival at Saint Petersburg’s train station follows a sightseeing tour of what must be one of the most beautiful cities in Russia, but also a night of heavy partying and a few too many shots of vodka. Either way, although he’s not willing to share it with the Italians, our party is very excited about the destination Mathias has told about. The destination which lies many hours to the north, high above the Arctic Circle in Russia’s northwestern corner, near the unsightly little village of Apatity.

The Search for the Remote

A mutual friend had introduced me to Mathias and his SnowXplore company. I have been freeriding for years and developed a passion for unknown destinations worldwide. But where my idea of remote ends is where Mathias enters the game.

For years now he has been offering trips to Kyrgyzstan, Uzbekistan, Kamchatka… He says he might stop his Uzbekistan trip because it’s become too crowded there, and he’s rethinking his Kyrgyzstan offer for the same reason. Despite the perfect powder, he doesn’t even want to consider going to Japan. Too busy.

Climate change made Mathias move in the direction of the Arctic Circle. A lucky coincidence, thanks to Google Earth, let Mathias discover, almost ten years ago, the small town of Kirovsk and its mountain range.

For the longest time he was the local hero, the lone wolf of snowboarding, discovering runs at the backside of the two-lift resort. I was already sold on the regular program he offers there, but for this trip Mathias had other ideas. He wants me to join him on a search for new terrain and new lines, in a mountain range where he hopes no one has ventured before.

A Bunk in Wagon Eight

A long train journey means reading, sleeping, listening to music, sharing snow experiences, discussing life problems and generally putting the world to rights. Mathias, born in the former East Germany and old enough to have known the old regime, is not convinced life has gotten better since Germany’s reunification. As a kid he always had everything he wanted. “You cannot miss what you don’t know,” I tell him. “Or what you don’t need,” is his sharp answer.

Our stopovers are small, Soviet-looking towns where you can buy food and beer or chat with your fellow travellers. That is, if you speak any Russian. I’d already noticed that even in Saint Petersburg, people’s knowledge of foreign languages was not what it is in the rest of Europe.

Once we get on the train, no-one speaks anything but Russian. Fortunately, Mathias is fluent – one of the advantages of growing up in the DDR. Outside, the landscape passes by the train window at a very slow 50 kilometres an hour. I keep on staring into the big white nothing.

Despite the efforts of the government, more and more people are leaving this cold part of Russia. It is all just trees and lakes, covered in pristine snow. For hours. Once we pass through Kovda and cross into Polyarnye Zori (or as we would say, the Polar circle), the environment changes. Hills start to rise out of the white, rocks start to play between the always accompanying trees. The snow blanket gets even thicker, small huts moan under the weight of it.

The people who jump off the train in Apatity all carry skis or snowboards. “See what I mean, this place is becoming too busy,” Mathias repeats his issues. “Let’s go and find new terrain.” Being familiar with both the big European resorts and some ‘secret spots’ in Europe, I have to disagree with Mathias. Even in the “too popular resort of Kirovsk” we will only meet a handful of freeriders.

This town in the Arctic Circle in the Murmansk Oblast will act as our base camp from where we will travel even further into the unexplored wilderness of the surrounding lakes and mountains. Kirovsk was built to mine the natural resources of the area. The Apatite Company has been operating in the area since 1929 to mine the unique apatite-nepheline ore from the Khibiny deposit.

It is now one of the world’s largest producers of high-grade phosphate ore and Russia’s only producer of nepheline concentrate. In summer Kirovsk is a very popular starting point for fishing tours on the lakes. In winter, there is the ski resort and huge ice sculptures built to attract tourists – almost exclusively Russian tourists.

For most European winter holidaymakers this place would probably seem too inhospitable. Snow starts falling in October, temperatures drop to minus 30 and daylight lasts for only a couple of hours. It is mid-March and the streets are literally covered in metres of snow. You can only identify parked cars by the shapes beneath the snow. 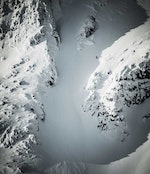 The next morning we pack only the minimum of gear required to snowboard. I must apologise for staying vague with further details – when Mathias said the spot was secret he wasn’t joking and he desperately wants it to stay that way. He won’t even let me take an iPhone snapshot of the detailed map we are looking at.

We throw all our gear in a big van, drive for 45 minutes on deserted and snow-covered roads and end up on a military exercise terrain where armoured vehicles and tanks lie abandoned. The Russian army uses this place for air strike exercises. “No pictures allowed here,” is how our snowmobile drivers Sasha and Andrei, greet us.

Our gear goes into the sledges behind the snowmobiles. Two people will be seated, the two others will be towed behind the snowmobiles. For another 45 minutes we cross an infinite, frozen lake. From the middle of the lake we look at the astonishing surrounding mountains. And at the never-ending productivity of the mining company.

Fishermen are fishing through holes in the ice. And there finally at the shore is a beautiful and comfortable cabin waiting to accommodate us. In summer the cabin is packed with fishermen but in winter the cabin is all-but deserted. Snowmobile drivers or tourists on dog sledges may occasionally pass by. But here in the middle of nowhere we basically get our own cottage with a Russian landlord who takes care of breakfast and dinner, and lights our private sauna and fireplace. It is delightful.

Our landlord, a local former skiing instructor who’s spent a big part of his life in this cabin, assures us no one has ever tried to ski these mountains before. Even with that reassurance, I can feel Mathias is worried about it as we leave for our first exploration of this part of the Khibiny mountain range. “If we arrive and I spot even one single line, we return back to Kirovsk,” he says, deadly serious.

Being towed by the snowmobile through the snow-covered forest is a good workout for your biceps. But once we get out of the woods, we discover the untouched terrain Mathias was anticipating. The mountains are flat on top and their gentle slopes make them easily accessible from the backside with the snowmobiles. The frontside on the other hand is a different matter. The runs we are aiming for are terrifyingly steep and full of gullies, rocks and cliffs.

The laps are short, but each time we get to the bottom there’s a snowmobile waiting. Since these machines are so fast you get to do as many runs as your legs can handle. You can take your time too, without worrying about others dropping into your line – the only person we see is a Sami herdsman on a snowmobile chasing his reindeer.

Days are filled with riding perfect, fresh powder down “drop wrong and you’re dead” runs, against a backdrop of the most splendid panoramas I’ve ever seen. Nights are filled with celebratory saunas, beer and vodka.

The weather is not always on our side. One day we awake to find that it is snowing. Under normal circumstances this would mean twice the fun. But out here on the edge of civilisation where even small mistakes might cause big problems, it leads to nail-biting frustration. In a deserted cabin at the far end of the world, boredom is hard to deal with.

Knitting socks from reindeer fur is not really what I came here for, and there is only so much beer and vodka you can drink before that too becomes boring. We go racing and wake boarding behind the snowmobiles on the frozen lake. But after a couple of hours that becomes boring too. We convince our drivers to go to one of the nuclear plants mining uranium in the area.

After sliding behind the snowmobile for nearly an hour, they suddenly hit the brakes. They’ve decided the risk of radiation is too high and there will be soldiers guarding the area. In this part of the Arctic Circle the Russians don’t only build nuclear power plants, they also test nuclear bombs. Since we neither want to end up in a Russian jail nor to start glowing in the dark, there is no alternative than to turn back.

Tree runs, building kickers and night sessions spent jumping pillows, rooftops and tractors provide better alternatives to riding proper lines. Unfortunately, the Khibiny mountains stay hidden under a thick layer of clouds and fog. We return to our base in Kirovsk, hoping weather will change.

For one hour we get something of a clear window. From the middle of the mountain, we see a tangle of plants, pipes, mines and railways before the weather closes in again. We play around in a derelict building but weather forces us back towards shelter.

When a blizzard hits the Kola Peninsula it seems, snow falls from everywhere, the wind blows from everywhere. It’s not clear where it’s coming from, or what you’re walking on. Driving aso becomes problematic. When we get back to Kirovsk we learn that the road to Murmansk, where we have a plane waiting to get us back home, is closed. We barely make it in time.

Despite being unlucky with the weather, our Russian Arctic Circle adventure has turned out to be one of the most memorable snow-sliding experiences ever. Two weeks later my Facebook messenger pings. A picture from Mathias. He’s just spent two days on a train and discovered another Arctic spot, this time in the wilderness of the Ural mountains. It’s even more remote than the area around Kirovsk. Mathias couldn’t sound more happy – normally as far as he’s concerned fewer people is always better. But he’s willing to extend an invitation to our group. And I for one know where I will be heading next winter.

In too deep | Escaping avalanches on a snowboard trip to Kyrgyzstan

We went heliskiing in the land of fire and ice

La Grave | Is the future of Europe’s best secret ski resort at risk?

...what have you done this week?

Adventure Destination of the Week | Marrakesh

Looking for an epic adventure in North Africa? You'll love Marrakesh and the Atlas Mountains.