It’s that time of year when the shelves of the country’s board shops are filled with snowboard buyer’s guides. Page after page of useful advice, jargon busting lexicons, and brand new products that will have your drooling with lust.

As much as we all pretend to pay close attention to what all the new sidecuts and camber angles mean, what we really love is the new graphics. That’s what hit you when you leaf through. “Who’s got the sickest graphic this year?” is a shamefully important question.

Over the years, snowboard makers have come up with some pretty racy designs in a bid to make their plank stand out. The fact is sex sells. We may not like to admit it, but it’s true.

Here are some of the most risqué, and shamelessly sexualised board ever to hit the market. Which ones are which? We’ll let you decide. 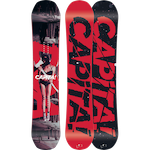 The DOA, one of Capita’s headline boards, has been around for years now. It’s rare that it doesn’t feature a flash of flesh here and there. From bikini clad masked executioners, to bikini clad gun-toting women, to bikini cla… You can see a theme developing, can’t you. 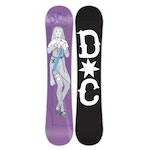 DC’s 2013/14 PBJ – apparently standing for Park Board for Jibbing – range features a series of hand-drawn, sexy looking nuns. Oh, and the nuns are armed. Obviously.

K2’s Happy Hour 2013 range featured a series of beautifully shot photos on their base. This one here, however, stands out.

The young, rather pleased looking lady reminds us of those terrible Topman t-shirts the smart shoes brigade wear in shit nightclubs in satellite towns up and down the country.

Last year, Burton brought out a Restricted version of their big-hitting Custom board. This version was only sold in specific shops, and featured a heavily blurred bikini wearing blonde woman.

It was reminiscent of waiting for online grot to buffer when watching on a really bad internet connection. Err, so we’ve been told. 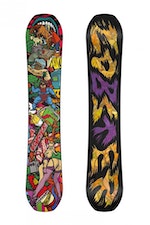 A graphic dreamt up by the Helgasons was always going to be a bit out there, but the Freestyle Board (or Baord as they sometimes spell it) really pushed the decency envelope.

This model features, among other atrocities, a man trying to get a horse to have sex with a goat, and a nappy-wearing punk kid riding on the back of a robot headed woman in lingerie. 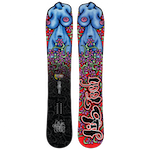 This is Jamie Lynn’s latest signature board from Lib Tech, featuring artwork made by the man himself – the bare breasts of a headless blue woman. We’re not sure Neil Buchanan would feature this on Art Attack.

In the early 2000s, Sims – one of the founders of snowboarding –  released the Fader series of boards. They all featured a scantily dressed, centre-fold looking young lady. The pinnacle (?) of these was the Jenna Jameson board, featuring the woman herself in the buff. Seriously, who bought these? 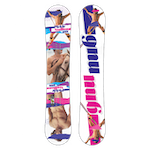 It’s not just semi naked women being used to flog sheets of poplar to randy punters. The Pickle Stallion by Gnu was awash with naked, muscle-bound chaps partaking in a number of outdoor activities, including skiing. We’re not sure what’s worse, the naked flesh or the skis!

Never heard of Estevan Oriol? Us neither – until he teamed up with Nitro to create this range of board.

Estevan is in fact a famed Mexican photographer. While the photos are amazing, there are some definite gratuitous ass shots thrown in for good measure. 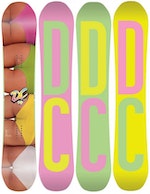 DC crop up again on this list, this time with the Ply range from a few years back. These boards were decked out in retro 80s pastels on the base, and four ladies arses on the top sheet. The pastel tones on their knickers match the other graphics though, so Gok Wan will be happy.

Burton renewing their rivalry with Sims, this time in the form of needlessly smutty boards. Big B released the range of Love boards, featuring PlayBoy centrefolds from the 1980s.

The boards caused quite a shit storm, with some resorts banning their staff from riding them, and shops refusing to stock them.

Burton saw sense and later replaced the range with this more toned down version.

Ah yes, the Bataleon Camel Toe. It kind of speaks for itself, doesn’t it?

We can only imagine Mr B needed to come up with a name for the slight swallow tail at the back of the board and Camel Toe was born.

Earlier this year, the company got a short ban from Facebook for posting the image, so we know that Zuckerberg, for one, doesn’t approve.

Yes are up there with Forum when it comes to nice, clean graphics. As such, we were staggered to find this anti-gem while trawling the internet for smutboards.

The graphics on this particularly number were boobs. Just boobs. We’re not sure who is old enough to be able to buy their own snowboards, but immature enough to think “The one wit the tits on is for me!” If you’re out there, please get in touch.

Our final stop is back with Lobster. The kings of she schlocky, shocky graphics released this Jib Board STD last year. The graphics featured a fingerless woman sufering with an extreme case of what we’re assured is a genuine medical condition called Vagina Dentata. Grim.

What Snowboarders Say vs. What They Really Mean

Airline Baggage Fee Charges For Skis And Snowboards: Which Is The Cheapest In Europe?

Get savvy so you don't get caught out

Airline Baggage Fee Charges For Skis And Snowboards: Which Is The Cheapest In Europe?

From Quebec To Japan And Back: This New Ride Snowboards Web Series Is Sick

Ride snowboarders give a rail masterclass

From Quebec To Japan And Back: This New Ride Snowboards Web Series Is Sick