Words and photos by Fiona Hamilton

This weekend we joined the crowds at Lovebox festival.

Now, in its 12th year in Victoria Park, this two day festival packs in a seriously eclectic programme across 12 stages.

Friday saw the likes of Stormzy, Major Lazor (complete with cannons and neon hula hoops) and the legendary Run the Jewels.

Magic Fields And Music | This Year’s Best Festivals You Might Not Have Heard About….

Then on Saturday, George Clinton brought his funky as hell ‘Mothership Connection’ to the main stage followed by the impossibly cool Jungle, Miike Snow and Chet Faker, but the one name on everyone’s lips was LCD Soundsystem, who closed the festival with an absolute banger on Saturday night.

As the sun broke through the grey skies for the first time in weeks, people cracked out their best festival fashion. Here are our picks of the raddest people of Lovebox 2016! 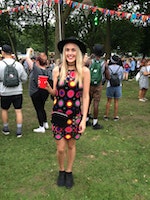 The stewards can make the day and Stevie was well into the vibe, dancing on the tables with the festival goers. Sophie from South London rocked this incredible homemade cape. She was at the festival manning the Lovespecs stand, selling kaleidoscopic love heart sunglasses to raise money for the Love Support Unite charity in Malawi. 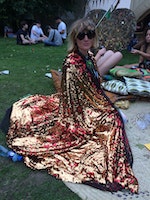 “It’s amazing to have a really nice festival in London which caters for across the board.”

International quartet Sebastian, James, Susan and Marta united with festival favourite, neon tribal paint. They couldn’t wait for Norman Jay MBE andMiike Snow, but seemed to be most excited about the food.

“‘Looking forward to my first bubble dogs experience in the VIP!”

Love this…festival meets a day at the races. James, 25 from South West London was looking pretty relaxed as he geared up for Chet Faker. 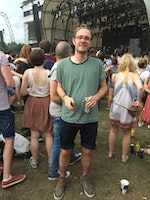 Jude, a great walking advert for the poptartboutique! 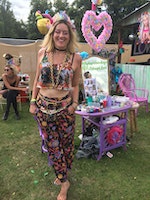 Shorts, sequins, bumbags… These girls hit the festival fashion nail on the head. 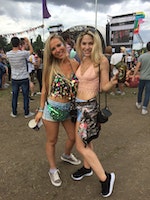 Steph and Bilal, attacking the glitter trend beard head on. “Looking forward to having a bit of a boogie to Jungle!” 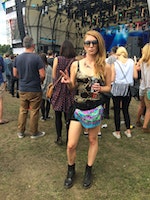 Helen is a carnival costume designer, employed by Lovebox to add some drama! More of Helen Davenport’s costumes as they paraded through the festival. 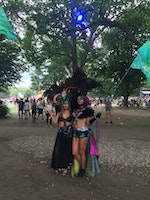 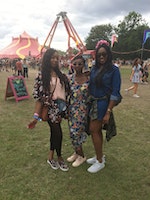 “The dancers were so amazing!”

Meet Ruth, Hugh the pilot, Yasmine and Babi from South West London. We bumped into this stylish bunch at Norman Jay! Hen do at Lovebox. Amazing shout. 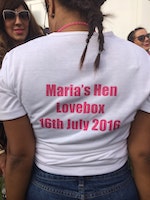 “Er, I haven’t seen any music yet”

Joseph and Michael came all the way from Liverpool looking awesome in these two pieces. Favourite outfit of the day, this is Jonathon wearing a Philip Normal t shirt, polka dotted with Tom Sellecks. He also does Pat Butcher and Angela Lansbury. Check them out here. Farah, 30 from Homerton, looking breezy in playsuit and glitter top. 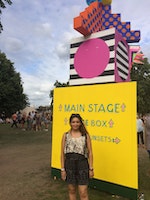 Hollie, Laura and Michelle. Feathers, sequins, lace and glitter. What more do you need? inspiration
We use cookies on our website to give you the most relevant experience by remembering your preferences and repeat visits. By clicking “Accept All”, you consent to the use of ALL the cookies. However, you may visit "Cookie Settings" to provide a controlled consent.
Cookie SettingsAccept All
Manage consent