In 2016, being a surfer is cool. Whether you’re a longboarder, a shortboarder, a big wave rider or a easy going old timer, surfing gives you instant kudos.

In the past however, surfing didn’t always had this level of chill, a century ago when people were first having a go at riding waves, people looked, well,a bit silly. Jumping around in the whitewater with a piece of wood doesn’t have quite the same effect without the modern hype surrounding it.

That doesn’t mean that those early pioneers didn’t have some pretty rad moves however, as these photos totally prove. From teensy male swimsuits, to freakin’ ginormous boards. Surfing back in the day was pretty damn hilarious….

2) Taken in 1960, before they’d discovered the ocean, Apparently

4) You know, It’s A Real Mystery Why The Male Swimsuit Died Out 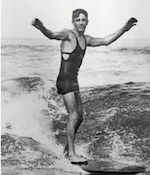 5) The luanda bay boys knew how to catch waves, woo the ladies AND keep their quiffs in place

13) When logs really were logs. Crikey.

The Pros & Cons Of Ordering A Custom Surfboard From A Shaper

The Pros & Cons Of Buying A Second-Hand Surfboard

article laughter Surfing
We use cookies on our website to give you the most relevant experience by remembering your preferences and repeat visits. By clicking “Accept All”, you consent to the use of ALL the cookies. However, you may visit "Cookie Settings" to provide a controlled consent.
Cookie SettingsAccept All
Manage consent