I’m just back from checking the surf at my local break. It’s a grey, wet day (we are in Wales after all…) and the gentle wind is slightly cross/onshore, which may explain the lack of people taking on the modest chest-high swell. Two, to be precise, one of whom gets out five minutes after I arrive.

However, over the last couple of weeks we’ve had days when the swell has been clean and overhead, it may even have been sunny, and there’s still been no more than ten people in the lineup. The water temperature is in the high teens, everyone out there knows each other so there’s plenty of banter – what’s not to like? And why are there so few of us liking it?

“Outside the annual summer holiday shitfight it’s always pretty quiet, which… can add a certain enchantment to the surfing experience.”

Maybe the medieval Welsh term for this area, ‘gwlad hud a lledrith’ (‘land of mystery and enchantment’) still applies even in the 21st century, for outside the annual summer holiday shitfight it’s always pretty quiet hereabouts, which is a bit of a mystery – and can add a certain enchantment to the surfing experience.

This applies even more so to the region to the north once known as Cantre’r Gwaelod (the Lowland Hundred), despite the fact that both areas can be reached in little more time than it takes to get to Cornwall (this obviously depends on where you live, but since London generally regards itself as the focal point of the known universe let’s use that as the reference point).

Yet people were riding waves in west Wales only three or four years after surfing was ‘introduced’ to Cornwall and North Devon, and photos exist of members of Whitesands-based Porthmawr Surf Life Saving Club taken in the early sixties, when the club was based in an old railway carriage; huge old planks are visible in the picture, no doubt owned by members of the club.

I was shown this image some years ago by one of the club founders, Dr. George Middleton of St. David’s. Now in his nineties and still getting into the surf occasionally on an old belly board, George’s children and grandchildren are also surfers and like most locals – indeed, like most surfers anywhere – they’ve made it their business to get out and explore the world’s waves everywhere from Indo to Costa Rica before returning home to snag a few at their local breaks.

At the same time as the lifeguards of Porthmawr SLSC were dragging members of the public from the sea at Whitesands, Pembrokeshire’s primo surf beach of Freshwater West was receiving regular visits from small groups of surfers based further east in Gower, Porthcawl and the Cardiff area, so west Wales’ surfing heritage is long, even if it is relatively unsung.

One of the region’s surf pioneers was Paul McHugh, who was making rudimentary boards in the sixties before moving down to Pembrokeshire. “I think I was one of the first down here; the only two local surfers I remember are Bob Rodgers and Reg Goddard,” he says. Bob still surfs, and Reg just self-published a small and interesting volume on the early days of Pembrokeshire surfing (£5 from all good local surf shops).

“Then people started coming here from Cardiff. But there were no young people in Pembrokeshire – there was no work.” And here Paul hits on one reason why the surf scene in west Wales has always been relatively low key.

“‘There were no young people in Pembrokeshire – there was no work.’ One reason why the surf scene in west Wales has always been relatively low key…”

“There was a big shortage of people in their early twenties so I guess that’s why surfing never took off down here in the early days, and the holiday industry was unexploited too, unlike today.” There’s still a relative shortage of young people in the area, despite the less than tantalising offer of poorly paid seasonal work in the burgeoning holiday industry, and when the howling winds, driving rains and long, dark nights of winter draw in, many of those employed in seasonal work head off to warm waves or snow, which means when the waves are at their best the ‘crowds’ are at their smallest (also aided by the fact that the less hardcore don’t always want to paddle out when it’s cold and/or big). 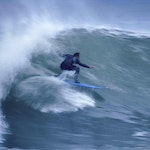 That’s not to say you’ll only ever be surfing here with a couple of mates and an inquisitive seal. You can’t keep much secret these days thanks to internet surf reports and social media so what were ‘semi-secret’ spots in my youth certainly won’t be surfer-free zones when conditions are right, which as stated above is usually in winter.

I’m thinking of the hollow beach breaks of South Pembrokeshire and the almost mystical point breaks of Cantre’r Gwaelod; the latter in particular were once known only to the few, but are now a legitimate surf destination for wave riders from all over Wales in the right conditions. The skill lies in knowing exactly when and where the ‘right’ conditions will occur – which discretion prevents me from revealing here…

But other than the occasional magazine shot from Mumbles-based surf photographer and flaneur ‘The Gill’, the west of Wales gets very little surf media coverage of any sort. ‘The Surfing Tribe’, a coffee-table-style history of British surfing, is perhaps the most detailed work on the sport in our wet and windswept isles yet it provides only the most cursory of mentions of West Wales within its pages (for which we are profoundly grateful, for who wants to end up like Cornwall?). 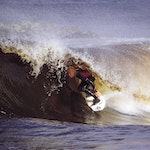 For many of those who do know the area one of its big attractions is, no doubt, the fact that it has stayed off the radar and as such hasn’t changed that much, for there’s something quite reassuring about knowing that as you head down the long dirt track to your favourite break very little in what you’re seeing has changed in decades. As an example, I recently came across a photo of my mate Tony Kitchell walking board under arm down to a fickle right-hander in North Pembrokeshire which is breaking double overhead, if not bigger. The picture was taken on a warm, sunny day in June 1996 and nothing in that image has changed other than Tony – the rubbly lane, the overhanging vegetation either side, the dark sea cliffs, golden beach and pale blue waves peeling away in the far distance are all the same now as they were then.

As I write this we’re moving into autumn and the waves are consistent – it hasn’t been flat for at least two weeks – but here comes the rub, and quite possibly the reason west Wales has for so long escaped recognition as a major surf centre.

With those waves comes wind, and plenty of it – some days I struggle to open the door of my house against the bastard. I disparage it thus because at times that wind is literally a physical force that seems hell-bent on making life as difficult as possible for anyone who chooses to venture outdoors.

Just getting to the surf can be a mission; strapping a board on the roof of your car when it’s fighting to sail off towards the Cambrian Mountains; clambering into a wetsuit that flaps around like a neoprene windsock; being buffeted about by windy blasts as you struggle down the beach with your board. The wind flings stinging rain in your face, sends sand swirling into your eyes and later in the day will hammer and bang around the house at night keeping you from your sleep.

“Some days I struggle to open the door of my house against the bastard.”

This almost relentless meteorological assault would be enough to deter many surfers, the more so since most of the time the winds are onshore. But so what, it’s often onshore on Britain’s west coast?

True, but unlike most other stretches of the west coast that get surfable waves, here in west Wales if your local break is plagued by day after day of onshores you have few alternative spots where it will be offshore unless you’re prepared to drive some considerable distance.

And even when you do get to one of the rare locations that are offshore the wind will still be roaring at you like a thing possessed, making it hard to paddle into the wave and frequently holding up the face for so long that it become little more than a slow-motion close-out.

I’ve grown to detest these bloody Atlantic gales, regular as clockwork from October to April, as have many other local surfers. Yet maybe it’s those accursed tempests that actually keeps things so low key on the local surf scene. I’ve had friends visit from Australia and Costa Rica who can scarcely credit that anyone would try to surf when blasts in excess of 50mph are smashing ashore for the fifth day in a row, and having experienced it once they don’t seem in any rush to come back.

So it seems that the very wind that is, right now, clattering around the eaves of my house and will probably keep me awake tonight is a blessing in disguise if you’re a surfer in west Wales, since it may be the very thing that keeps our waves relatively crowd free. Which kind of goes to show that every cloud has a silver lining – even if that cloud is being hustled along at 50mph by a howling gale…

To read the rest of the November ‘Other’ issue head here

The Glide | From Polynesia’s First Surfers To Today’s Skate Punks, One Thing Unites Us All

A La Recherche Du Stoke Perdu | Alf Alderson Thought He Was Over Surfing, Could A Trip To Cornwall Rekindle His Stoke?

For most people it's a novelty, for you it's the best place to sleep...

19 Signs You're Addicted To Camping And Sleeping Under The Stars

Off on an adventure? Don't forget to take the most important thing of all...

Too Haute To Handle? | We Took On The World’s Toughest Amateur Road Cycling Race

The Other Cape | Alternative Adventures in South Africa

We really, really want to go to Singapore right now...