The Road Less Travelled series, in partnership with the all-new Ford S-MAX, follows presenters Ed Leigh and Phil Young on an adventure around the UK's action sports hotspots.

See more of Phil and Ed’s road trip and enter the competition for the chance win your own all-new Ford S-MAX experience.
Cornwall doesn’t give up her secrets lightly and the surfers who live there are protective of the best spots. But Phil and Ed still managed to find the best waves, thanks to a bit of help from a local legend…

Autumn is the best season to go surfing in Europe, the water is still warm from summer and the Atlantic is starting to return to its more familiar restless state. Storms are brewing up swells far out to sea that will eventually deliver powerful waves to it’s western coasts. It’s the perfect time for a road trip to Cornwall.

Phil Young and I have been friends for more than two decades, when I met him over 15 years ago he was about as close as you could get to the underground pulse of London. He has a wonderfully sharp wit and the effortless laconic lope of a well fed jaguar.

Combine this with a huge record collection and a not inconsiderable talent for snowboarding and skateboarding and you have all the vital ingredients for one the coolest people you are ever likely to meet.

Surfing is not squash. You can’t book a court for an hour and just turn up.

Like all of us he has aged, but unlike most of us he has done it very well in part this is due to the fact that he is not interested in doing anything unless it’s fun.

This means that he is a lot of fun to hang out with and when he calls and says: “I’ve got my hands on the all-new S-MAX, fancy going on on a road trip?” you don’t say no. 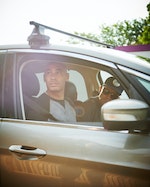 We leave London at two o’clock on a Tuesday afternoon and while the traffic is thick it’s standard fare for the south circular pre-rush hour – a lot of stop start.

But even fully loaded the versatile all-new S-MAX has plenty of room for Phil and me, cameraman-slash-conversational-savant Leo and all of the gear we’ll need for the next week of adventure.

Eventually we clear the city traffic at Hammersmith and set off down the M4, a tarmac artery heading straight for England’s Atlantic coast.

Britain isn’t a superpower in the world of surfing. We don’t have the glamour of California, Hawaii or Australia, but what we lack in reef breaks and tanned beach bunnies we more than make up for in passion and determination. And if you know where to look, there are some quality waves.

Phil is very well-connected and he’s given an old mate of his Ben Skinner a call. Ben is British surfing royalty, born in Jersey he moved to Cornwall when he was ten. In the twenty years since he has amassed a huge haul of silverware including five European longboard championships and 11 British titles.

What Ben doesn’t know about the Cornish coast and the waves that break around it wouldn’t fill a winkle’s shell. And as we’re about to find out, he is also the equivalent of a human red carpet when it comes to hospitality.

Surfing is not squash. You can’t book a court for an hour and just turn up. Predicting the swell and then combining that with knowledge of wind conditions and strength means that finding good waves is a science.

Timing is everything and so it was with a certain amount of excitement that we call Ben on the way down to find out what the sea has in store for us. The forecast is good.

Not epic, but it wasn’t as bad as the previous drizzling flat spell. So the rest of the drive is swallowed by excited banter and speculation at how much of the Atlantic Phil and I will be ingesting over the next couple of days.

The drive is dominated by speculation of how much of the Atlantic Phil and I will be ingesting over the next couple of days.

Light offshore winds are the best for creating clean waves and these are most likely at dawn and dusk. So it follows that the early bird catches the best wave. After a weary, headlight hypnosis induced sleep we rise early to the smell of the sea in the air and head straight for Ben’s shaping factory, the home of Skin Dog surfboards.

Surfboards are works of art. Despite the fact that the foam blanks are cut by computers they are still finished by hand and that means every single board is an original.

He digs out two boards that he thinks will work for Phil and me – a beautiful mustard coloured log for Phil and a severely optimistic 5’3 egg for me. He then stuffs us with breakfast from a greasy spoon and we head out on surfari.

The way people check surf will tell you about their personality. Some always believe the grass is greener and will waste time and tide searching until eventually they end up back at the first spot where it is half as good as it was the first time around.

Personally I am a premature checker, at the first sign of waves I will jump in excitedly. Ben however has a different approach. He has the patience of a man who had had more than his fair share of incredible waves and confidently announces that a swing in swell direction later will turn on his local spot. However in the interests of getting wet and assessing our ability we’re going jump in at Perranporth to start with.

The water is still warm and while the waves are messy there is enough to prove that Phil has modestly undersold his ability. It is also clear that I have oversold mine or at least my fitness. But there is the added bonus that Ben knows the owner of the pub on the beach, which means that we’ve been able to drive right out onto the sand. While at first I am nervous, the four wheel drive on the S-MAX kicks in, providing extra grip which is very reassuring.

As we debrief after the session Ben helps us replace the thousands of calories we’ve expended thrashing around in the water by taking us to a shop where they sell Cornish pasties the size and density of an anvil.

Ben is generous with his compliments, but promises that the waves are only going to get better. To illustrate this he takes us up to one of the many look out spots along the coast. We thread our way through an impossible maze of narrow lanes and it occurs to me that they must act as a fantastic defence system for waves the locals are keen to keep to themselves.

Even in the age of GPS navigation there are some secrets that country lanes will never give up. Or at least that’s what I think, until Ben glances down at the impressive touch screen navigation system – we are pinpointed on what looks like a main thoroughfare.

“How does it know where we are? There’s no reception here,” he says.

I don’t know how it knows, but I know it’s clever.

On a hunch Ben takes us to a wave that he thinks might be pumping when the tide is right. He says it’s a local hideaway and sure enough when we get there we find just one solitary surfer sitting in his van waiting for it to come in.

Just a few hundred metres further along we can see what can only be described as a soup of humans and fibreglass doing battle at one of the coast’s better known spots.

The reason for the lack of people does become slightly clearer when Ben and I go in for a surf. The beach is littered with rocks. At high tide they are covered, but only just.

After a couple of waves I call it and enjoy the Skinner show. Backlit by a fast retreating autumn sun he throws plumes of spray out of emerald green waves weaving around crumbled sections of wave with the kind of speed and grace usually reserved for creatures that are born in the ocean.

As soon as he’s out of the water Ben has us back in the cars and moving quickly to make the most of the remaining light. The third surf of the day is by far the best in terms of wave quality, but for Phil and I it is really just a light show. Our arms are spent and have all the paddle power of over-cooked pot noodles.

But the sunset is framed by a heavy front of cloud and as perfect waves stand up and peel off into the corner of the bay Ben puts on a display, weaving majestically between the thinning crowd of bobbing surfers.

Surfing is not about winning. It’s about understanding and reading the waves, coordinating yourself in time with them and then if you’re lucky, for a fleeting moment, expressing yourself on that wave. But when it does happen, the effect is so powerful it sustains you for days.

In the course of a whole day I’ve had just three short moments where it’s all come together, but that’s more than enough. It looks like surfing’s worked its magic on Phil too, because as we say our farewells he is frothing about buying one of Ben’s boards.

One thing’s for certain, we will both be coming back for more.

See more of Phil and Ed’s road trip and enter the competition for the chance win your own all-new Ford S-MAX experience.