Martijn Doolaard grew up in a small town in the south of the Netherlands. He lived in a “couple of other places” before ending up in Amsterdam, where he normally lives and works. When he isn’t crossing continents by bike that is…

As when we spoke to him he was riding from Vancouver to Patagonia, and before that in 2015 he cycled from Amsterdam to Singapore, documenting his hardcore yet enviable trip in a beautiful coffee table-style tome called One Year On A Bike. Here, he talks us through his five favourite photographs.

I was in bands for most of my twenties, which got me into making music videos. At the time Canon DSLR’s were widely used to shoot music video, so my first camera was a Canon 600D. That was about six years ago. I used it mainly for video and time-lapse photography. During my bicycle journeys I got more into photography as a way of story telling.

I shoot adventure travel photography. It’s about reconnecting with nature, spending time outdoors and getting inspired by other cultures. My photos are often part of a bigger narrative of solo travelling. For example, my one-year bike trip from Amsterdam to Singapore, and more recently my current trip from Vancouver to Patagonia. It’s not necessarily about me, but it is about one person undergoing all the aspects of solo travelling.

“I don’t ever wish I’d taken someone else’s photos. I like to find my own story.”

There is this never-stopping feed on social media which constantly stimulates me to travel and find those moments to shoot. In terms of travel photography, the more remote you go, the more likely you’ll find new shots and moments to capture. There’s a drive for me to take the unbeaten paths. For me inspiration means finding things you were not looking for.

I have no particular heroes. I follow a whole list of great photographers on instagram who inspire me. But I don’t ever wish I’d taken someone else’s photos. Of course there is lots of amazing work out there, but I’d like to find my own story. It’s a journey of self-exploration and pushing your own boundaries.

I had just crossed the border from Turkey to Iran and I was still a bit nervous to be in this part of the world, alone on my bicycle. This man and little boy [above] were attending to a flock of sheep and invited me over to join for some watermelon. He didn’t speak English, nor I Farsi. He just kept pointing at the watermelon to eat more. It was the first example of the many people who showed their hospitality in Iran. People here are amazingly warm and generous, without asking anything in return.

This picture above was shot high in the mountains in east Turkey. The road was pretty bad, but the views made it worth it. Most of the day it was very foggy and I kept waiting for that moment the light would return. What I love about landscape photography is that every moment is different. You cannot plan this.

“What I love about landscape photography is that every moment is different.”

I had just crossed Europe and arrived at the Black Sea. On a bicycle travelling is a lot more intense, because you’re exposed to the elements all the time. This was my first camping spot on the beach and it felt great to have reached the other end of Europe by bike.

I passed this tree when it was already dark on a remote road in Myanmar and decided to spend the night here. The photo was taken very early morning after I just woke up. There was so much life in this tree, from birds and bees to mice. The mist and the sunlight made it otherworldly.

Waking up in Cappadocia, Turkey while about 150 hot air balloons lift up in the valleys. I was cycling together for a bit with some Swiss cyclists whom I had met on the road. We camped out in the hills and woke up with this view. It was intensely quiet at this hour of day. The only thing you could hear were the soft exhausts fires of the balloons.

Martijn Doolard posts almost daily on his Instagram account and he writes more in-depth stories on his blog espiritu-libre.com

His book One Year on a Bike, published by Gestalten, is onsale now. You can buy it here. 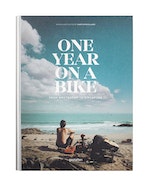 The story of the men who rescue orphan bikes

inspiration My Life in Pictures Photography
We use cookies on our website to give you the most relevant experience by remembering your preferences and repeat visits. By clicking “Accept All”, you consent to the use of ALL the cookies. However, you may visit "Cookie Settings" to provide a controlled consent.
Cookie SettingsAccept All
Manage consent