Bergen in Norway has been on your bucket list for a while, hasn’t it? Been sitting there, on that list you keep magnetised to the fridge, for a couple of years right? Sitting there, looking at you, and whispering at you while you’re rustling up a penne arrabiata “Pssst. Come to Bergen. It’s real nice.”

Situated on the country’s southwestern coast, Bergen is Norway’s second city. It’s surrounded by epic mountains and fjords, and couldn’t be more postcard-perfect if, well, it was literally made of postcards. The fact that Bergen’s city centre is flanked by seven mountains means it is often called ‘the city between the seven mountains’ (catchy).

How To Get There

From the UK, you can get direct flights to Bergen from London, Edinburgh, and Aberdeen. If you’re going to Bergen by car, it’s about a seven hour drive from Oslo. Another great shout, if you’re coming from Oslo, is to take the train. Taking 34 years to build, it’s a train journey that’s widely cited as one of Europe’s very best (it takes just seven and a half hours, station to station). The scenery out the train’s window needs to be seen to be believed. Google it, if you don’t believe us.

Things To Do In Bergen

OK. OK. So much we could talk about in this section but this being Norway (basically Disneyland for fjord enthusiasts) we’d be mad not to start by citing the spectacular Nordic fjords as one of the top reasons to visit Bergen. After all, as well as being dubbed ‘the city between the seven mountains’, the city is also known as the ‘Gateway to the Fjords’.

North of Bergen is Sognefjord. Sognefjord is the largest and deepest fjord in Norway, and nicknamed the ‘King of the Fjords’. Hardangerfjord, south of Bergen, meanwhile is an absolute beauty and home to the iconic Trolltunga rock formation. If you haven’t seen this formation on Instagram, a formation which literally translates into English as “Troll tongue,” then, quite frankly, you’re not on Instagram.

Another cool thing to do while in Bergen is hiking up and around Fløyen. The summit, situated 400 metres above sea level, serves up incredible views over the Bergen Peninsula; making it a popular spot for both tourists and locals alike. There is, it’s worth pointing out, also a funicular system if you can’t be bothered walking the whole way that’ll get you about 320 metres up in approximately eight minutes.

The highest of Bergen’s seven mountains is Mount Ulriken and, just like with Fløyen, it offers amazing views of the surrounding area. Two of the best places to start your Ulriken hike from are the Ulriken Cable Car (there’s a trail point just behind where it goes from), and Montana (near the Montana Hostel). 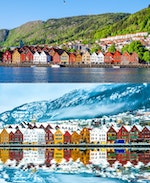 If you’re looking for affordable accommodation in Bergen, accommodation that’s right on the doorstep of some of Bergen’s best hiking options, look no further than Bergen Hostel Montana. As we’ve mentioned already, it’s very near the start point for a walk up Mount Ulriken. A dormitory bed here starts at about £18 per person in low season, going up slightly in high season. If you don’t want to share with a load of strangers, there are more private options although the price obviously increases to reflect that. Other popular budget accommodation options in Bergen, while we’re on the subject, are the Intermission Hostel and the Marken Guesthouse.

Those after a nice hotel to stay in while visiting Bergen should check out either Citybox Bergen, Bergen Bors Hotel, and The Hanseatic Hotel. Being hotels, they’re naturally more expensive than Bergen hostel options but if a little more luxury is what you’re after, these spots will see you right to varying degrees.

This being Norway, a country with some of the least restrictive wild camping laws in the world, you might want to consider bringing your tent, and a sleeping bag, to Bergen and finding a spot under the stars somewhere in the city’s surrounding wilderness. If wild camping, in a new country, feels a bit too bold for you the city also has a number of official campsites. For more information on these campsites, head to the official Visit Bergen website.

Foodie? Bit of cash to spend? Want to “taste” Bergen? Look no further than Restaurant 1877. Unique decor and a word-class menu that changes every six weeks, a menu built upon traditional Norwegian cooking methods, this place will host a party in your mouth the likes of which your tongue will never forget.

Located on Holmen Island, just outside Bergen, Cornelius Sjømat Restaurant is something of an institution in this part of the world. Offering diners breathtaking views of Nordic nature, the Meteorological Menu (inspired by the weather of the day) is a must for seafood enthusiasts.

If you’re after a bit more of a pub vibe, be sure to check out Pingvinen. Relaxed atmosphere, traditional Norwegian cooking, with a wide variety of local and international beers on offer is the order of the day here. What more could you possibly want?

Check out our other adventure travel destinations for 2020.

This destination guide was brought to you in association with outdoor fashion retailer Blackleaf.

adventure travel guide 2020 information
We use cookies on our website to give you the most relevant experience by remembering your preferences and repeat visits. By clicking “Accept All”, you consent to the use of ALL the cookies. However, you may visit "Cookie Settings" to provide a controlled consent.
Cookie SettingsAccept All
Manage consent