Anyone who’s ever been travelling will understand the stress parents go through, as their precious son or daughter disappears off into the big wide world.

Most of us rely on regular Skype chats, postcards and emails to assure our parents that everything is going fine when we’re on the other side of the planet, but 27 year old Jonathan Quinonez took it one step further.

Quinonez, who made a last minute decision to travel and have an adventure, is taking photos of himself holding a sign that reads “Mom, I’m fine” at  every place he stops!

The former model, originally from Brussels, has currently taken photos in Colombia, Mexico, Costa Rica and more, with the photos ranging from extreme skydiving, to dangerous animals, to dancing with pretty women in a town square.

“His Instagram of 26 photographs has already attracted over 105,000 followers. That’s a lot of people to pass the message on to mum!”

Quinonez says that the idea for the photos came from his recent visit to Cuba, the communist party was clocking phone calls and emails at the time of his visit, but he still needed to let his mum know  he’d arrived safely.

The photos became the best way to make sure everyone at home could let his mum know he was safe.

Quinonez’s plan got even more attention than he expected, his Instagram of 26 photographs has already attracted over 105,000 followers. That’s a lot of people to pass the message on to mum!

So how does Quinonez mum feel about his travels, now he’s in such good contact?

“She is still worried, like every mother” says Quinonez. “But in the end, she is happy because she knows I’m having the time of my life”

Check out some of the awesome photos below! 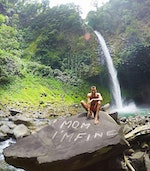 In Pursuit of Paradise | Is New Zealand the Adventure Capital of the World?

article inspiration laughter Travel
We use cookies on our website to give you the most relevant experience by remembering your preferences and repeat visits. By clicking “Accept All”, you consent to the use of ALL the cookies. However, you may visit "Cookie Settings" to provide a controlled consent.
Cookie SettingsAccept All
Manage consent