September 22 is World Rhino Day, a day created to raise awareness around the world of – YOU GUESSED IT – rhinos; one of the most endangered species in the world.

It also happens to fall on the same day as Elephant Appreciation Day, which is awkward for all involved in some ways; a bit like your mate organising a flat-warming on your birthday or your other mate who’s an elephant turning up wearing the same shirt as you (if you were a rhino).

Anyway, we were going to use it as an excuse for double the party, but it turns out our “budget doesn’t stretch to the point where a World Rhino Day and Elephant Appreciation Day Party is financially feasible”, so here’s a picture gallery instead and some information about where you can travel responsibly to see rhinos and elephants in the wild.

Namibia was the first African country to introduce environmental protection into its constitution and its low population and low key tourism profile ensures an authentic and less crowded safari experience. The country currently boasts the largest population of black rhino in the world. The white rhino is also a major conservation success story, having been brought back from the very brink of extinction. Their numbers are climbing in Namibia, after being re-located from South Africa in 1995.

The elephant population in Namibia has risen from 7,500 to 20,000 in the last 20 years. There are roughly 2,500 elephants living in Etosha National Park, with single male groups found in the open planes and breeding herds preferring the acacia, sandveld and mopane woodlands.

Wild Dog Safaris provides a great selection of tours around Namibia that are sensitive to the environment and wild animals.

The Baanchang Elephant Park in Thailand adopts and rescues elephants from illegal trade and those being kept in unsuitable living environments.  The park was established by Pom, after he experienced the long hours’ elephants had to endure in other businesses. In his park Pom wanted to focus on ‘Mahout Training’; where a trainer is assigned an elephant early in its life. As a result, they remain bonded to each other throughout their lives.

The Baanchang Elephant Park offers day camps and breaks where visitors learn to feed, wash and exercise their elephants, even learning how to safely ride elephants in the natural way behind their ears (rather than using trekking chairs).

Another conservation success, the number of greater one-horned rhino has also been steadily growing in numbers since 1975 when there were only 600 rhinos left in the wild. After decades of successful efforts, the species increased to 3,500 in India and Nepal by mid-2015. The one-horned rhino is now the most common of the three Asian rhino species.

This forest camp on the banks of the river Kayeri is home to 150 retired elephants who once worked for the Karnataka Forest Department. To spread awareness of the protection of elephants JLR educate their visitors about the history and nature of elephants, as well as hosting participatory events such as elephant baths, feeding, grooming and learning basic Mahout commands.

The island of Sumatra | Indonesia

Second to the Javan rhino as the most threatened rhino species, the Sumatran rhino are found in Gunung Leuser, Kerinci-Seblat and Bukit Barisan Selatan National Parks. A few are also still living in Kalimantan.

Responsible Travel offers families with children over the age of 10 to take part in local charity projects in central Sri Lanka, near the city of Kandy. Families can work alongside conservationists and scientists to track wild elephants, identify them, monitor their behaviour and meet the native communities who have are affected by the presence of elephants.

Responsible Travel also offer a seven-day experience where volunteers can spend every day observing elephants or helping carry out health checks. Other activities will depend on the requirements of the project or community at the time you travel, but could typically include harvesting pineapples and bananas for elephants to eat, small construction jobs such as fixing and maintaining handrails or roads around the conservation, or helping on the farm. 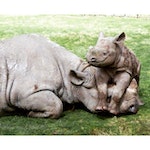 There are only 63 Javan rhino left in the wild but they can be found to inhabit Ujung Kulon National Park. This Unesco World Heritage–listed national park has remained an outpost of prime rainforest and untouched wilderness, virgin beaches and healthy coral reefs. Relatively inaccessible, few people visit Indonesia’s first national park, but it is one of the most rewarding.

23 of The Funniest Photobombs You’ll Ever See… By Animals