Camping is an activity that can be put in the ‘old-school pursuit’ bracket. Why? Because people have been doing it, in some form or other, for bloody ages. The creating and sharing of memes, on the other hand, is a relatively new phenomenon. Sure, back in the day the first humans probably made some funny reoccurring jokes with their cave paintings but the potential for said cave paintings to go viral was a complete non-starter.

These camping memes, set out for you below, are a magnificent coming-together of the old world of camping and the new world of the internet. And, what’s more, they’re pretty funny to boot. If you’re an adventurous person, with an adventurous spirit, we reckon you’ll dig the comedy vibes on offer here. 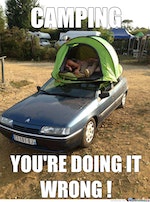 In Tents | 20 Reasons Why You Should Never Go Camping

gallery laughter Listicle Outdoors pride surprise
We use cookies on our website to give you the most relevant experience by remembering your preferences and repeat visits. By clicking “Accept All”, you consent to the use of ALL the cookies. However, you may visit "Cookie Settings" to provide a controlled consent.
Cookie SettingsAccept All
Manage consent