Now, obviously, we can’t really give you an answer to that first question but if endless Zoom quizzes are beginning to take their toll on you (we’re up to three a week at the moment) you should be reassured by the thought that one day, some day, this will all be over and proper outside excursions will be fully back on the menu.

There is light at the end of the tunnel even if, at times during this prolonged ordeal, that idea seemed incredibly far away. Anyway, with an optimistic “glass half-full” mindset towards the future we’ve decided to start testing some kit again (albeit in a socially responsible, stay alert, kind of way). And, with that in mind, what better bit of kit to test than The North Face Activist FutureLight Mid boot? It’s literally got future in its name. Welcome to the future, and all that.

First thing we should say is that we tested this product round south east London (no unnecessary travel to the National Parks  for us, thanks very much). The second thing to say is that it hasn’t been raining much recently so we’ve not been able to give it the full on four hour walk in the rain treatment just yet although, rest assured, that’s on our to-do list when the opportunity arises.

To some extent though, the recent hot weather has been a blessing in disguise when it’s come to testing this product’s much discussed breathability factor.

If you’ve been paying attention to our website over the course of the last year, you’ll already be well aware that we’ve been testing FutureLight fabric technology in jacket form (we went skiing with Sam Anthamatten, no less). At the time of that test, we were genuinely impressed by the way ‘Nanospinning’ had helped to create a jacket that was both waterproof and genuinely breathable.

Ever since we first became aware of FutureLight’s shift into footwear, we’ve been intrigued to see how the technology would be implemented in the world of walking boots.

Developed with a FutureLight membrane, The North Face have claimed that the Activists “breathe as hard as you do” during strenuous activity and, as far we’re concerned, the product more than lived up to things on that score. Of course we weren’t exactly trekking up Kilimanjaro – highest mountain in Africa – with them on our feet, but we were charging up and down the local hills and it was, like we said, a hot day in the city.

I once went to Iceland, in summer, in a pair of extremely waterproof trail shoes (mentioning no names). The waterproofing was brilliant on them while stepping through streams and the like but they were so unbearably stuffy while walking around, and even while sitting about under a surprisingly hot Icelandic sun, that my feet had a pretty miserable experience on the trip. I’d decided to pack light so they were my only shoes for the entirety, a rookie error in hindsight. The Activist FutureLight never felt stuffy in the same way. 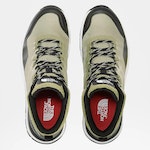 The Activist Mid feels a bit tight when you first put it on, like your foot’s on the receiving end of a particularly aggressive cuddle, but we found this feeling dissipated after some time spent walking around. The gusseted tongue and OrthoLite insoles deliver prolonged comfort when you’re racking up the miles, while the protective toe caps handle impact well. We took the boots on some gravelly terrain in the park and the EXTS soles provided solid grip. As mentioned already, we have plans to take these things out of the city in due course but they handled the city tests we put in front of them with aplomb.

In terms of a waterproof test, we resorted to sticking one of the boots under a shower head with our hand inside it to check for leakage. It held up well, even after a prolonged “downpour”, with the water beading in that supremely satisfying way it does when running up against good waterproofing.

Stylistically speaking, we also love what The North Face Activist FutureLight Mid brings to the table.

We’re yet to take these things out on a proper adventure but so far, so good. We’re looking forward to getting out there, with them on our feet, and seeing what they’re really made of.

Gear review
We use cookies on our website to give you the most relevant experience by remembering your preferences and repeat visits. By clicking “Accept All”, you consent to the use of ALL the cookies. However, you may visit "Cookie Settings" to provide a controlled consent.
Cookie SettingsAccept All
Manage consent