It’s pretty difficult to get punched in the face on a mountain bike trail, by a human fist rather than a tree or a rock, anyway.

Mountain bikers tend to be pretty friendly, especially if you’re one of their own. They’ll ask you how your day has been, where you’ve been riding, chat to you about your bike and even often help you out if you’ve had a mechanical.

They like beer. They like the outdoors. They like bikes. But they can snap, and if you’ve made them do that, there’s a pretty good chance that you deserve what you’re about to get…

1) Hit A Few Bikes With Your Car When You Arrive, Don’t Apologise

Reason you’ll get punched: Would you hit someone’s child and leave without helping?

3) Use The Trails As Your Own Personal Garbage Dump

Reason: Such a colossal d*ckhead.

Reason: Nobody. Gives. A. Shit.

Reason: Wait in turn or turn around and go home. It’s only fair.

Reason: What is wrong with you?!

8) Ask A Woman If The Sport ‘Is Not A Little Dangerous For You?’

Reason: She’s doing the world a favour by punching you.

9) Pick A Dude On A 29er And Ask Him If He’s Over-Compensating. Do It Everytime You See Him

Reason: If you can’t work this one out, you probably get punched quite a lot.

Reason: You’re that condescending guy that everyone hates.

13) Spend The Day Tailing Other Mountain Bikers Down Trails, Less Than A Metre Behind Them At All Times

Reason: You are quite literally the worst person we know.

Reason: Sympathy dude. Sympathy. It’ll be you down there before you know it.

15) Laugh at Beginners, And Deliberately Try and Overtake Them Every Time You See Them

Reason: You are an awful person. It’ll probably be a fellow saviour of a mountain biker that punches you in this instance, rather than the poor beginner themselves.

16) Overtake Other Riders Whenever You Fancy, Sacrificing Their Safety And Stability For A Couple Of Seconds Gain

Reason: You’re that guy. Nobody wants to be that guy.

17) Stay At The Bottom Of The Trail After You’ve Finished, Have A Drink And Watch Back Your GoPro Footage

Reason: You may not get punched, but you’ll probably get a mountain bike to your back and a subsequent face plant.

18) Chuck Someone’s Helmet As Far As You Possibly Can

Reason: You know why, you Machiavellian bastard, you. Is this one a bit too farfetched?

19) Have Your Lunch In The Middle Of A Trail 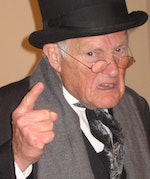 Reason: There are benches for that shit! BENCHES!

20) If Asked If You’ve Got A Spare Puncture Repair Kit, Reply ‘Yes’, Then Cycle Away

Reason: Imagine you were on the other side of the conversation…

Reason: You are a terrible, terrible person. Remind us to unfriend you on Facebook.

22) Wait Till A Group Order Their Round Of Post-Ride Beers, Flip Their Table

Reason: This is getting out of hand, even we want to punch you now…

23) Or, If You’re After The Express Route To Pain, Walk Up To A Mountain Biker And Punch Them In The Face

Reason: If you’re going to knock beers over, you may as well do this. We wouldn’t advise either though.

17 Words That Mean Something Completely Different To Mountain Bikers

Another video, another debate... Who do you think is at fault for this road accident?

“F*ck That Alligator": Texan Man Ignores Warnings And Gets Killed By An 11-Foot Reptile

“I asked him please do not go swimming, there’s a bigger alligator out here..."

“F*ck That Alligator": Texan Man Ignores Warnings And Gets Killed By An 11-Foot Reptile

Oh Japan you strange little land of weird brilliance: what the heck is this?

anticipation article laughter list pride
We use cookies on our website to give you the most relevant experience by remembering your preferences and repeat visits. By clicking “Accept All”, you consent to the use of ALL the cookies. However, you may visit "Cookie Settings" to provide a controlled consent.
Cookie SettingsAccept All
Manage consent