Semenuk threw down a near-perfect run on the Rotorua track he was forced to walk away from injured last year, facing his demons and claiming the newly named ‘Kelly McGarry Memorial Trophy’ with a 94.33 score as a result.

“Last year was motivation to get down the run,” the champ told Mpora. “My first run went nicely as planned and in the end I had a victory lap. I did want some redemption.

“I actually didn’t plan on coming here until a couple of days before the event so this is a huge bonus! It’s always nice to take a contest win and I haven’t won here before.”

He was run close by the Nicholi Rogatkin though, whose score of 93 would’ve taken the victory on most other days. The American actually probably threw down two of the most memorable runs of the day – albeit for rather different reasons.

Run one saw Nicholi launch a cork 720 off the opening step down before immediately bursting a tyre upon landing, while the high-flyer would nail his run perfectly second time around, but again burst a tyre after landing the world’s first ever 1080 in contest with his last trick of the day.

Speaking at the finish line after his second run, he said: “I tried one of the gnarliest tricks in my whole run straight out the start so it was definitely nerve-racking, and just to hear that tyre blow out upon landing was just a horrible feeling. It put even more nerves in for the second run.

“But I was up there and all the guys were supporting me – they saw me throwing down the tricks in practise and they wanted me to get down to the bottom. We’re all out here sending it in memory of McGazza. A really emotional start to the contest and it’s great to get out there and get it done.

“Coming down on that second run almost felt surreal. I was saying to myself ‘still here’, ‘still here’, and then the last jump was just a crazy feeling. My tyre blew out again but I rode it out.” 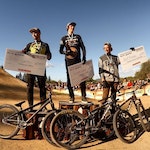 Brett Rheeder came third with a run including an opposite cork 720, marked down because of a couple of foot slips but still impressive enough to get a score of 92. It says a lot about the field that a score of 92 is coming third!

“I won this contest last year and lots of people thought there was lots of pressure to win it again, and there was,” admitted Brett. “But y’know the chances of winning a slopestyle contest two years in a row are pretty unlikely. I’m okay with my third place finish. I tried. I tried to win, but my second run was a little bit sketchy and I ended up sitting in third.

“It was a huge run for myself because I’ve never done that opposite cork 720 that I did on that last jump before. Only into a foam pit. It was a pretty YOLO moment!

“I was sitting in third before I dropped in and thought that if I one up’d my last run I could beat Nicholi, but didn’t really think that I’d be able to beat Brandon. So I really changed it up and sent it in hopes that I’d be able to actually win. That run I did land, but my foot came off the pedal a couple of times!”

Broken Bones, Streakers, and Double Backflips: The 10 Best Moments From The History Of Crankworx

Must Watch: Brandon Semenuk Just Nailed The Greatest Slopestyle Run Of All Time

31 Reasons Why Snowboarding in the Park Will Always Beat Powder

Here's how to guarantee a rubbish surf trip for everyone...

The converted bus that will make you quit your job and hit the road...

They are now bringing in shark-detecting jet skis at WSL events....

Surfing | How You Think You Look Vs. How You Actually Look

That sinking feeling when you look back on your GoPro footage...

Surfing: How You Think You Look Vs. How You Actually Look

“They come out of nowhere and yell at you to move over. It’s scary.”