When it comes to street trials, we really do live in a special time. If it’s not Scotland’s very own Danny MacAskill doing bits to bruise the underside of your chin, with all the jaw-dropping, then it’s most likely the incredibly talented rider from East Tyrol – Fabio Wibmer.

‘Wibmer’s Law’, the latest film from Fabio (a film that at the time of writing has been viewed over 11 million times), took over a year to make. That scene at the beginning, for example, where the suited and booted businessman grabs Wibmer’s wheel reportedly took somewhere between 300 and 500 attempts. The whole thing plays out like a masterpiece of the genre, with numerous set pieces that’ll make you laugh out in disbelief – including the least subtle, even by Red Bull’s standards, can-drinking moment.

On the subject of the production, which you can watch in-depth in a 48 minutes long Behind The Scenes video on Red Bull TV, Fabio has said, “The shooting of Wibmer’s Law definitely was the most challenging production I have done so far. Some of the takes took us countless attempts, some of them even several hundreds. In the final edit, of course, you don’t see any of these struggles.”

By turning the Austrian cities of Innsbruck, Salzburg, Vienna and Linz into his own personal, fun-filled, playground, 24-year-old Fabio takes you on the kind of journey that’ll underline just how unbelievably bleak and rain-filled your morning bicycle commutes to the office often are.

With this video already being seen by more people than the entire the population of Belgium, and in just over a week as well, there’s a fair chance you might already have watched it. If though you haven’t yet had the pleasure, go find yourself a darkened room somewhere, sit back… and bask in its magnificence. 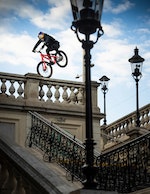 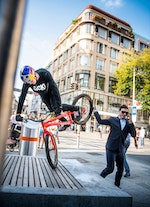 Mountain Biking In Nepal | Riding The Gosainkunda Trail In The Himalayas

If you like trials riding and cool, strangely spooky, abandoned waterparks in the desert look no further

Control Your Climate | Danny MacAskill Plays With The Weather

Control Your Climate | Watch Danny MacAskill Get Creative With The Weather

MTB At The Olympics | XC Course Preview For Tokyo 2020

With the summer games less than a year away, here's a sneak preview to get you in the mood