“Small ulcers opened up on my inner thigh, these were manageable and I covered them in small dressings as they appeared. Two weeks from the end I had a minor fall on some sastrugi [ridge of hard snow], but in trying to catch my fall I heard and felt my leg essentially split open – all the small and larger ulcers broke open into one large one covering the majority of my inner thigh.”

Now, this may seem like a cruel and grisly injury to sustain while on your local countryside walk, but consider that explorer Jenny Davis sustained this injury – the relatively unknown ’polar thigh’ injury – two weeks into a gruelling attempt to become the fastest woman to reach the South Pole. Totally alone.

You’re probably wondering how someone could find themselves 250 miles from the South Pole, with a debilitating leg injury, so let’s wind the clocks back a few years. As like many modern-day adventurers, Davis found herself searching for a break from the typical nine to five normality – whilst working as a lawyer in London – and, like many, there was a catalyst for this to change.

In Jenny’s case, it was sadly the discovery of a dangerous growth in her abdomen and imminent admittance to hospital – where she endured  a course of tumour shrinking drugs, along with major surgery. While bed bound, following her surgery, Jenny decided that rather than flicking through hospital TV while working her way through yet another pack of grapes she would instead sign herself up to the infamous Marathon des Sables (2015) and start planning the training required for the race.

Known as ’The Toughest Footrace on Earth’, the 250 kilometre long Marathon des Sables is the pinnacle of all ultra marathons; crossing its way through one of the most inhospitable environments in the world, the Sahara. Juggling a demanding job and training for this race is difficult enough for those who aren’t recovering from a life-changing medical condition. Jenny, however, took all of this within her stride (frequently waking up at 03.00 to train), and finished as the 35th female.

A few ultramarathons later, Jenny had soon caught the bug and thrived in environments where she was able to test her body to the limits. It wasn’t until February 2016 however, where Jenny took part in an Arctic challenge, that she really made her mark. The Ice Ultra, as the name alludes to, is a 230 km journey across snowfields, mountains and frozen lakes in northern Sweden. Despite temperatures as low as -37 degrees, and falling through ice into a freezing lake below, Jenny stepped onto the podium – finishing as the third fastest female.

Mount Vinson was next on the cards, arranged as Jenny’s honeymoon with her husband, Matt. The highest mountain in Antarctica was not only planned as their couple’s ‘romantic’ getaway break, it would also double up as an altitude acclimatisation trip before setting out to become the fastest woman to reach the South Pole solo. Jenny found time to chat with me about her attempts to reach the Pole, and the challenges she inevitably came up against while attempting to complete this goal.

Tell me about your first attempt to reach the South Pole solo in 2018. What was that experience like?

“I’ll never forget the moment they dropped me off at the coastline starting point, it was the oddest moment waving goodbye to the pilot and starting my 700 mile ski to the Pole. Completely isolated and entirely alone. I thrived in the environment and loved it, but it was definitely one of the hardest things I’ve ever done.

“It was the worst weather in circa 50 years with a great deal of snow (it rarely snows in Antarctica and precipitation is low), so none of my equipment was really made for deep snow and progress was slow. At some points it was up to my knees, I was using twice the effort to cover only over half the daily distance needed for the record. I was hit with three major storms that hampered progress.

“Things were hard and it would have been touch and go whether I’d make the Pole in time (there’s a cut off date for the end of the season at the end of January as that’s when they close the Pole and leave for the year), but I continued on. On day 20, I started having painful stomach pains, by day 22 I’m urgently medevaced with suspected appendicitis and flown back to Chile for treatment, then onto the UK once stable. Diagnosis later confirmed to be peritonitis and a bowel infection.” 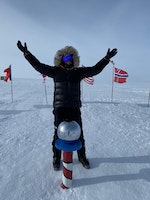 And now onto the successful expedition. Did you just feel more prepared?

“Preparedness wasn’t an issue, so no I didn’t feel more prepared. I felt excited and incredibly grateful for the opportunity to return, Antarctica is definitely somewhere I only expected to be visiting once in a lifetime. I couldn’t have done it without the support of The North Face.

“I trained harder than I ever thought possible for the second attempt, I cannot tell you how ready I felt and was desperate to get there and get going. For the first circa 500 miles I was on pace to achieve the new world speed record, that was the aim and the weather was mostly great. Everything just clicked into place, until I suffered a serious leg injury and then a stove exploding on me! I think that’s the draw of taking on big challenges like this, especially in remote environments like Antarctica – you’re always on this knife edge and it really doesn’t take much for a situation to become perilous.”

“I heard and felt my leg essentially split open”

What was it like pushing through to the South Pole, hampered by the leg injury?

“The last 200 miles I skied with a condition known as ‘polar thigh’, I can’t remember now exactly when it started as it came on slowly. It’s a painful abrasion injury worsened by the extreme cold. Small ulcers opened up on my inner thigh, these were manageable and I covered them in small dressings as they appeared. Two weeks from the end I had a minor fall on some sastrugi, but in trying to catch my fall I heard and felt my leg essentially split open – all the small and larger ulcers broke open into one large one covering the majority of my inner thigh.

“It was agony and I’m still trying to figure out how I did it, I know I’m resilient and mentally strong but I didn’t know I had it in me to ski 200 miles on an injury like this one. I reached the Pole after 44 days and missed the new world record by 5 days. The relief when I arrived there was enormous, I cannot explain in words how much pain I’d been in. I arrived back in London a few days later and was immediately taken from the airport to the Royal Free hospital in London for two operations and a skin graft on my leg injury. There’s no functional damage and I’ll make a full recovery.”

There’s a fantastic quote displayed on Jenny’s website, from her surgeon – Alex Woollard – who performed the skin graft on Jenny’s leg over an “area of skin equivalent to 2% of her total body surface area”, which reads: “She will have a permanent scar on the left thigh from the graft. We can make improvements to this in the long term, but it will always be there as a totem to her achievement. I hope she wears it with pride.” This is a statement I think is particularly true for Jenny, as someone who has returned to face the challenges, even in the face of failure and some pretty close to the bone experiences.

“I hope she wears it with pride’

It sounds like you’ve been through the wars throughout your life. How do you overcome all of these challenges?

“I really don’t see it that way, I accepted/realised long ago that if I’m the kind of person that does adventures and expeditions like these then there’s a higher risk of things going wrong every now and then. I’ve had so many incredible experiences. I wouldn’t change it, I never want to stop exploring and I’ll just have some cracking scars to tell the grandkids about!

“I’m not particularly driven by ‘firsts’, for me it’s more about the physical challenge and the goal I’ve set myself. So doing it fastest is of more interest to me, learning where my physical and mental limits lie rather than simply being the first to do something.”

What do you feel was the biggest barrier you came up against on your way to becoming an endurance athlete?

“Recovering from injuries! I was always prone to overtraining and would suffer with injuries as a result, to my mind training hard and as much as possible surely meant an increased chance of success in an event. That’s so very wrong and I learnt that lesson the hard way. My change in mentality is thanks to the coaching team I now have but dealing with all those injuries beforehand was definitely a major barrier to my progress.”

What advice would you give to women looking to get into endurance sports and then, say, polar exploration?

“Find a mentor! Whatever it is you’re interested in doing, contact someone who’s done it, or done something similar, before. Ask for help, ask all the questions. I get that it’s daunting taking your first steps into the unknown but what do you really have to lose?”

What’s next for you?

“It’s about using the time as productively as I can, and finally finishing my new book. I’m also looking at ocean rowing, a route that has never successfully been completed before. It’ll be in a team but again the interest in taking part for me is the team aspect and the physical and mental skills required, rather than the fact we’ll be the first if we successfully complete it.”

You can check out updates from Jenny here

Jenny’s Artic expedition was supported by The North Face

Mountain Rescue | Q & A with a Volunteer

Outdoors vs. President | Brands Back Legal Action Against Trump

The outdoor industry is fighting back against Trump's regressive environmental policies

During these trying times, The North Face are stepping up to ensure outdoor organisations and professionals are protected

Skin Deep | Does The Outdoors Have A Race Problem?

Climbing Everest At Home | How Many Steps Does It Take?

Some hikers recently completed the 5,346 metre climb to reach Everest Base Camp in their own home. Here's many stairs you'll have to conquer to...

Climbing Everest At Home | How Many Steps To Climb The World's Highest Mountain?