Born on the 17th of October 1938, in the American state of Montana, Robert Craig Knievel Junior (aka Evel Knievel) went on to become the world’s most famous and iconic stunt performer. The ultimate daredevil in life, and the embodiment of the “go big, or go home” mantra, Knievel relished the opportunity to point his motorcycle at ramps and fly through the air like an eagle at every available opportunity.

Were his stunts always successful? No. Knievel failed in his attempt to jump over 13 buses at Wembley Stadium on his motorbike (in front of 90,000-strong crowd), he crashed in rehearsals for a stunt involving a tank full of live sharks, he hit the bottom of Snake River Canyon after trying to fly across it in a rocket. According to an entry into the Guinness Book of World Records, he had suffered an astonishing 433 bone fractures by the end of 1975; making that time you broke your arm falling off a friend’s slide look pretty tame in comparison.

“You’re Never A Failure Until You Fail To Get Up”

Man, myth, legend. During his career, Knievel diced with death so many times and came away from the encounters still breathing that, throughout his peak years as a stunt performer, he gave off a feeling of invincibility; a sense that he couldn’t be killed. He eventually passed in 2007, aged 69, of pulmonary disease.

Knievel may be gone, but the things he did and said in life will never be forgotten. Travis Pastrana and his Nitro Circus crew, the TV show Jackass, and a whole heap of people in action sports owe him a debt of gratitude for paving the way forward. Here’s some of the most memorable quotes from the man himself. 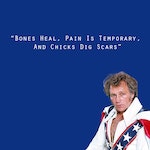 2) You’re never a failure until you fail to get up.”

5) “I would always rather be in the arena fighting than be a spectator.”

6) “I did everything by the seat of my pants. That’s why I got hurt so much.”

7) “Anybody can jump a motorcycle. The trouble begins when you try to land it.”

9) “I thought I was bulletproof or Superman there for a while. I thought I’d never run out of nerve. Never.”

10) “There are a lot of myths about my injuries. They say I have broken every bone in my body. Not true. But I have broken 35 bones. I had surgery 14 times to pin and plate. I shattered my pelvis. I forget all of the things that have broke.”

12) “I guess I thought I was Elvis Presley but I’ll tell ya something. All Elvis did was stand on a stage and play a guitar. He never fell off on that pavement at no 80 mph.”

The Aaron ‘Wheelz’ Fotheringham Interview | ‘It’s A Wheelchair, Not A Prison’

Best Travel Quotes | 101 Inspirational Quotes Guaranteed To Give You Wanderlust

Action Sports evel knievel inspiration Listicle
We use cookies on our website to give you the most relevant experience by remembering your preferences and repeat visits. By clicking “Accept All”, you consent to the use of ALL the cookies. However, you may visit "Cookie Settings" to provide a controlled consent.
Cookie SettingsAccept All
Manage consent