Everyone has a bucket list, even if they don’t have it scribbled in chalk down a giant blackboard or scrawled in italics in a tea-stained notepad.

You might not even call it a bucket list, but we’re sure you’ve got dreams you want to live out before you die. Setting goals is part of human nature, but it turns out some people have a less imagination than others when it comes to aspirations.

Apparently, becoming a millionaire is the number one item on most British bucket lists…

According to a recent survey which asked thousands of Brits what their main life goals were, a lot of people have very mundane, incredibly run-of-the-mill ideas on how they want to live their lives.

There’s nothing particularly wrong with this, but here at Mpora, we’re all for living life to the full and pushing boundaries. So, when we learned that one of the most common inclusions on a bucket list was to “ride a segway”, we were left a little bit bewildered.

In retaliation to the utter unexcitement of traditionally mundane dreams then, we’ve formed this list of cliches. Not all clichés are bad in the world of the bucket list of course, but some deserve taken down a notch. There’s a world of other opportunities waiting…

Why not? We did it once. It was a bit shit. Dolphins are cool, but they are what they are.

Alternative: Why drive through a route of repetitive monotony when you could take on an epic cycle through somewhere like Canada, Europe or even the Scottish highlands or hills of Northern Island. You’d spend less on fuel, meet more people along the way, and the views would be significantly, significantly better.

Why not? Fuck off.

Why not? Apparently, this is the number one item on most Brit’s bucket lists (or Brit’s list of cliches). We’re not sure it’s the kind of thing you should be putting on a bucket list though – it’ll lead to a career-driven, boardroom dominated life where your family hates you and your only friend is Netflix.

Alternative: Aim for happiness, adventure and new horizons, not cash. Some honest philosophical chat from your good friends at Mpora.

5) Pay Off Your Mortgage

Why not? Again, this is a bit too much of a commitment to the Rat Race for us. Aiming to pay off your mortgage shares a fair few issues with the previous point…

Alternative: Don’t battle mortgages and money costs all your life, go out there and do whatever helps you enjoy yourself. In this case, our suggested alternative is living in a Treehouse or transforming an old bus into an awesome new pad. 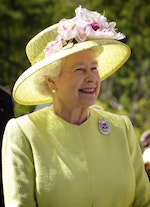 Why not? This is another one which pops up surprisingly commonly amongst Brits. Think about it though – what do you actually think this would be like if it happened? You’re not going to end up getting lashed with Lizzie. She’s not going to join your next downhill trip or your next session on the snowboard. She’s going to tamely wave and then spew some nonsense about her Corgis. Alternative: Spend your hard-earned cash to take you to one of the wonders of the world, to the mountains of Alaska, to the Amazonian rainforest or to literally anywhere else on our planet that isn’t based around a fictitious cartoon mouse.

Why not? Pretty high up there on our list of cliches, especially for many of gap year students. It’s good for a photo opportunity, but you’ll get bored pretty quickly. Tame.

Alternative: If you’re going to go to India, take yourself mountain biking at the Pindari Glacier trail or go for some kitesurfing off the island of Rameshwaram.

9) Stay At The World’s Best Hotel

Why not? It’s far, far too expensive, and you’ll be smacked with a sledgehammer of pretention as soon as you walk in.

Alternative: Use the money you were going to spend on this to fund every single other item on your bucket list. Obviously.

Why not? Gets real old, real quick.

Alternative: Wait till it freezes over, then do this.

11) Do An Army Assault Course

Why not? This is what people do on stag parties, or if you’re Bear Grylls. You wouldn’t have paintball on your list would you? Although saying that, you did have segways…

Alternative: Take up skateboarding. Navigating your way around the streets is basically an assault course, plus you’ll look a lot cooler than with a face covered in mud.

Why not? Expensive. Crowded. Dirty. Tacky. Clichéd. Etc etc etc. Definitely sitting high up on the list of cliches.

13) Go To A Tiger Temple or Ride An Elephant Abroad

Why not? Do a bit of googling and you’ll quickly find out there’s a horrible web of animal cruelty entangled across these industries. Don’t contribute to inhumane treatment of amazing animals.

Alternative: Help out at an animal sanctuary or do volunteer work with an organization promoting animal safety. There’s plenty of opportunities waiting.

Why not? Bit dull and egotistical isn’t it?

Alternative: If you really want a physical challenge, take on one of the great cycling routes of the world, go ski touring in a place most people haven’t even heard of, or, if you’re mad for travelling on two feet, take on an ultra-marathon.

Why not? It’s nice, but it could be improved by the suggestion below.

Why not? It smells of urine.

Alternative: If you’re going to go to Paris, get involved in the culture there; embrace the street art, stay in Belleville, write poetry and speak French. The Eiffel Tower looks better the further you are away.

Why not? Due to religious significance of this rock to the Aboriginals, it’s actually pretty offensive to visit and touch it.

Alternative: You’re in Australia! Get yourself to the coastline immediately, grab a surfboard, a snorkel, a badly paid bar job, a flat, and start living the dream.

18) Go To Coachella or Glastonbury

Alternative: Take on one of the numerous, cheaper, less muddy, sun-drenched festivals on the continent which don’t look like a zombie apocalypse from a birds eye view.

Alternative: Don’t be a dickhead.

Why not? Little known fact – they’re only green through a camera lens. You’ve been misled for years.

Alternative: While you’re in the arctic regions, take on a weekend hike out on a frozen lake or something equally as ridiculous as that instead of chasing the lights. You might even be able to do both at once.

Why not? Want to be in a room so full you can barely move surrounded by smashed tourists and a few token locals? Be our guest.

Alternative: Hit up any of the other numerous beer festivals in Munich or indeed Germany. They’re not exactly infrequent and you’ll get a much better taste for the culture.

Why not? It’s more than a little inhumane.

Alternative: Animal conservation efforts give a much better experience of some of the world’s greatest natural wonders than something like this ever could. Get involved.

Why not? It’s a bunch of rocks standing upright. Why is this even a thing? Look at the photos on Google and spare yourself an afternoon of boredom so severe you’ll end up desperately trying to watch old episodes of The Antiques Roadshow on a phone loading slower than pornography in the 1990s.

Alternative: Paint your wall at home, grab a chair, and then sit and watch as the beads of paint slowly solidify into your colour of choice. It’ll probably still be more exciting than Stonehenge.

So, that’s the terrible list of cliches that we’ve stumbled upon. Got any to add to the list?

23 Ridiculous Facts That Prove Bear Grylls Is The Ultimate Adventurer

Glamping vs. Camping: There’s Only One Way To Settle It… With A Rap Battle

Why Is This Snowboarder Being Dragged Through The Air By A Helicopter?

This is why you should never try snowboarding in the clouds...

Why Is This Snowboarder Being Dragged Through The Air By A Helicopter?

Off the Beaten Trail: Jamaica Must be the Least Likely Mountain Bike Paradise on Earth...

Is this mountain biking's best-kept secret?

Off the Beaten Trail: This Must be The World’s Least Likely Mountain Bike Paradise...

Ever wanted to escape the rat race? These capsules might just be the answer.

article disgust inspiration laughter list surprise
We use cookies on our website to give you the most relevant experience by remembering your preferences and repeat visits. By clicking “Accept All”, you consent to the use of ALL the cookies. However, you may visit "Cookie Settings" to provide a controlled consent.
Cookie SettingsAccept All
Manage consent