Mark Beaumont has spent more time outdoors than most. The adventurer had cycled the length of Scotland by the time he was 12-years-old, and he conquered Britain on the bike by the age of 15.

Think about what you were doing when you were that age for a moment and let that sink in.

The Scotsman would go on to take the world by storm, cycling 18, 292 miles around the globe in just 194 days and 17 hours – beating the existing record by more than 80 full days in the process.

Mark no longer holds that particular record, but his efforts did lead to further exploits – rowing through the Canadian Arctic and cycling across the Americas to name but a few – and the trip also lead to acclaimed BBC series ‘The Man Who Cycled The World’, establishing him firmly as a respected documentary maker.

The adventurer has displayed intense focus, determination and resilience throughout his career to push himself onwards, but it’s to his experience and training rather than any unique skill or mentality that he attributes his success.

“The only way to really prepare for a big expedition is to physically get yourself in shape, and to know what it’s going to be like,” he said. “When you’re out there for long periods, you’re falling back on the experience of having been there before.

“People often ask what it was like to set off to cycle around the world, and there’s no way I could’ve done that if I hadn’t aged 12 pedalled across Scotland and aged 15 cycled Britain. 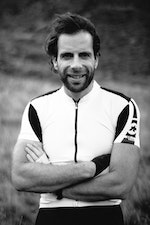 “Year by year I just kept building bigger trips until the idea of cycling around the world wasn’t so scary to me. It’s about pushing your own comfort zone, taking on something that is exciting and building your experience the next time and knowing that you can take it further.”

While it was this progressive ideology that got Mark to where he is today though, the multi-sport athlete admits that his approach to expeditions has vastly changed since he first got started.

When he was young Mark found his drive in completing challenges that could be seen and recorded, but now the adventurer is more motivated by personal encounters and connections.

He continued: “Adventure is about taking on new things that excite you. Pushing yourself physically and mentally and changing your view on the world.

“It’s kind of surprised me how much my take on adventure has changed through the years.

“I used to think adventure was just about testing myself and breaking records, but I found out when I was rowing the oceans that what I missed most was the fact that there was no story looking out the way.

“[Previously my journeys] had been purely an inward journey, and when I realised that, the fire in my belly disappeared.

“To my great surprise, having thought adventure was purely about reaching limits, I realised that it’s more than that. It’s about the people, the places, the cultures and the world around you.”

Wise words from a man who has certainly spent his fair share of time meeting new faces and exploring new cultures.

Beaumont has now set foot on every continent except Antarctica, spent nearly two years of his life in a tent, and filmed adventure footage in over 100 countries.

When it comes to dreaming up new challenges, the athlete admits that as well as having personal aims and ideas; sometimes it’s good to just go along for the ride.

“The sorts of challenges I’ve taken have varied hugely,” he said. “It started off as me pushing myself, but as I learned how to film these journeys, I got asked to join certain journeys as a documentary maker – as a storyteller.

“That has taken me to some fascinating places. I wouldn’t have had the training or the expertise needed to lead these kinds of trips [referring to the likes of arctic rowing], but as a filmmaker I could tell the story.

“When you stay open to inspiration from other people you go outside of your comfort zone. The ability to film these trips has let me take on adventures that I never would’ve looked at.

“Really, I wouldn’t have a career in adventure if I hadn’t become a storyteller for what I do as well.”

Having gone so many places and seen so many things then – oceans, mountains, deserts – it’s with a nervous expectation that we hear what’s next on the cards for Mark Beaumont.

How does he continue to try and top past experiences, and is there anything in the world that he wouldn’t give a shot?

“There’s a lot of things which scare me,” he admits. “Things that I know I will never do.

“I’m never going to be that guy that throws himself off a cliff or looks for an adrenaline fix. For me, it’s all about the buzz I get from pushing myself over a range of sports – but especially in that ultra endurance sphere.

“I feel like I’m in an interesting point in my career now, because I’ve done a lot of big adventures and now I’m trying to push myself harder and faster. I’m now looking to do shorter journeys – still thousands of miles, but around five or six thousand instead of 13,000 or 18,000 miles – but I’m looking to go even faster.”

The adventurer added: “I’ve taken on a whole load of sports and journeys but my passion and first love is definitely the bike. In the next couple of years I’m going to be back out there, training hard and taking on some new world records.

“It’s been four or five years since I’ve been on any serious cycling trips so to be back doing what I was first known for is really exciting.

“You get to travel at a speed where you go huge distances and yet see it all. You get to explore the world at such a satisfying place.”

Something to look forward to for all the Beaumont fans out there then. More cycling, more adventures, more record-breaking expeditions and more breath-taking journeys.

It’s a life that seems a world away for most working in a full-time job or in education, but Mark insists that there is no special quality that sets him apart. It’s the getting started rather than the endurance that’s really the hardest part.

“I don’t think that everyone would enjoy doing exactly what I do, but I do believe that many people could train themselves to do it.

“People often say to me: ‘I would love to do what you do’, and I understand that people love the idea of it, but the reality can often be half a year spent on your own pushing huge distances.

“The most important thing that I try and explain is that what you are doing each day isn’t actually that difficult on an adventure. The hardest thing by far is committing to getting to the start line and having the will to do it.

“It’s far harder to start a journey than it is to continue one.”

And there you have it. His words make so much sense in so many ways. We could all save up, quit our jobs and take on the adventure of a lifetime, but there are so many factors standing in the way of first getting started.

Until you find the drive to take on a journey of your own though, there’s always Mark Beaumont to show you what the world is like from the warmth of your own home.

It might not be the same as getting out in the cold and experiencing it for yourself, but it may just inspire you to do just that.

The Mat Hoffman Interview: 25 Years At The Top

From pampered princesses to puking brats, these visitors are guaranteed to make your life hell

Want to become a stereotypical road cyclist, mountain biker or hipster tool? Here are our tips on how to get going...

From pampered princesses to puking brats, these visitors are guaranteed to make your life hell

Want to become a stereotypical road cyclist, mountain biker or hipster tool? Here are our tips on how to get going...

Packed away the tent for winter? Time to get it back out again...

Baggy Jeans, Beards And Acne: How To Be A Park Rat, 80s Skier, Or Skate Mum In A Few Simple Steps

Warning: this is not pretty...

Baggy Jeans, Beards And Acne: How To Be A Park Rat, 80s Skier, Or Skate Mum In A Few Simple Steps