"As an adult I’ve never hit anything, though I can’t make that claim as a boy."

By the time Daniel Kish was 13 months old he’d lost both eyes to a rare kind of cancer. Now 48, he has no recollection of ever not being blind. But he’s never considered it as a disability. He says: “I’ve never seen it as any big deal. There are obviously limitations and there are strengths but I didn’t really focus that much attention on it.”

Kish, who’s lived in California all his life, gets about by echolocating, or as he terms it flash sonar. Kish clicks his tongue sending out flashes or pulses of sound. As he says: “Those sounds encounter physical surfaces and rebound off them. When they return they carry information about those surfaces, such as the density, texture to some degree, the location, the geometry of the surface and so on. And from that information it’s possible for me to construct an image. A 3D image, which scientists have discovered forms in the visual cortex region of the brain.”

Scientists believe blind people who don’t echolocate don’t construct the same 3D image. And it gets more complicated with blind people who could previously see as imaginary factors come into play.

"I was much more interested in the thrill and excitement of riding a bike than the fear."

Kish’s first love was climbing. According to his mother he was scaling things at six months, long before he could walk. Furniture, bookshelves, then as he got older neighbour’s fences and trees… Kish says: “I was pretty agile, so it was easy for me to climb. It was second nature though I was pretty much the only kid who climbed the way I climbed. I mean the kind of trees I climbed and the height.”

I ask if he thinks that’s because he couldn’t see down? “I don’t know. I could certainly echolocate down but you’d get up to a point where you can’t really hear the ground anymore because you’re so high. In general blind people don’t seem to have much of a fear of heights though.”

I ask how the bike riding came about? “As a kid it was just what the other kids were doing. So I thought: ‘This is what kids do.’ It looked interesting and it was fast, and I could tell there was an agility to it.”

Kish’s friend had an undersized bike that he learnt on. First by holding onto a wall, then he realised he didn’t need the wall so off he went “peppering the environment with a barrage of clicks”. He was just six.

He says: “I really wanted a bike of my own and then one showed up. At first I was very disappointed as it was big, the proper size basically, but I’d learnt to ride on this little thing so I was quite annoyed at first but then I just learnt to ride that.”

"We played this game where we would just ride around and crash into each other. Last person standing wins."

I ask what he liked about cycling? “Going further and faster than I could on foot, the sensation of rolling along, you know you can do more stunt-like things…”

What? You did stunts!?
“Well not really. I did wheelies and we had crazy races and we played this game called Crash n Smash Derby, where we would literally just ride around and crash into each other. Last person standing wins.”

“We did have this kid in our neighbourhood who was an Evil Knievel fanatic. He would build these massive jumps off ramps and things. By listening I could hear the bike roll up and him take the ramp and jump. Once he was jumping over another bike and I heard him clip the pedal and I was sure he was going to crash and burn but he didn’t. He was older and we all thought he was pretty cool.”

I ask Kish if he was scared cycling back then? “No, I guess I was apprehensive not to do certain things like Evil Knievel stuff, but I was much more interested in the thrill and excitement of riding a bike than the fear.”

“As a kid it was just what the other kids were doing. So I thought: ‘This is what kids do.’ It looked interesting and it was fast, and I could tell there was an agility to it.”

And a sense of belonging perhaps? “I won’t say there wasn’t an interest in belonging as I think we all lie on that continuum but I think for me it was more about achievement and the desire to experience things and to be in charge of the process.”

In his years of cycling has he ever crashed? “I’ve never hit a pedestrian. As an adult I’ve never hit anything, though I can’t make that claim as a boy. I had a few crashes back then. Blind people are no more fragile than sighted people in that regard. You do what you need to do to stop bleeding, if there is bleeding, and off you go.”

How about getting heckled or told he shouldn’t be on the road? “That’s pretty rare because people don’t necessarily know you’re blind. We haven’t developed the ‘blind rider’ badge yet! We haven’t quite figured out how to pull that off in a way that doesn’t cause a lot of undue attention to someone.”

What about red lights? “Whether you’re cycling or whether you’re a pedestrian it’s about reading the traffic around you and observing traffic patterns. The awkward part is if there’s no traffic around at all but you don’t really have the same blind corners phenomenon if you’re using hearing, as your primary sense. You hear everything.” 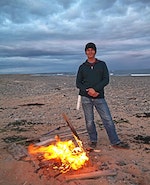 "How long would it take a sighted person to learn to echolocate? Four to five days. But the skill would go away if they weren’t immersed in using it, it’

He likes to hike and camp around his Southern Californian home in the Angeles National Forest. How would he know if a bear was nearby? “The noise I guess haha. I’ve never really what if’ed myself on that scenario much. There are some bears where I hike, but the bears are more aggressive in the north of the state. We have rattlesnakes and things but I don’t worry too much.”

Not all blind people echolocate, as the clicking sound can be socially frowned upon, as can canes, which Kish also uses regularly when not on his bike, alongside a braille compass and “keeping my wits about me.”

How long would it take a blind person to learn to echolocate? “Only a couple of days to get the process up and running. It’s easier when you’re younger but it works with all ages but you have to apply it and refine it. So if I was to spend a couple of days teaching a blind person how to echolocate and then they go right back on someone’s arm after the process it all goes away.”

And a sighted person? “More like four to five days. But again the skill would go away if they weren’t immersed in using it, it’s like learning a language.”

“You can get a sense of it with this exercise. You make a ‘shhhhhhhh’ sound and as you’re doing it you hold a large object like a platter or tray and move it towards and away from you. You should be able to hear the sound fluctuate. It helps if you close your eyes.”

"People are much more willing to come up with reasons not to something than to do it.”

Kish is the President of World Access for the Blind, and their mission is to spur on “self-directed achievement” for blind people while raising awareness about the “strengths and capabilities” of blind people. They encourage echolocation and he thinks most blind people could ride bikes if they wanted and in the case of young people if their parents would consider it. Though he’d probably recommend hiking first. The important thing is getting outdoors.

“Most people are afraid, they say: ‘What about rocks and roots?’ People are much more willing to come up with reasons not to something than to do it.”

He’s also taken blind kids mountain biking. He says: “You’ll have a lead rider who’ll attach a zip tie into their rear spokes and the trail rider can follow from that sound. You can often tell the gradient from listening to the rider in front.”

My last question is a cheesy one that Kish is gracious enough to answer. What do you dream? “ I’ve never seen in my dreams. I dream according to what I experience, so I echolocate in my dreams and use my cane but I also have flying dreams. There’s pretty much no limit.”

For more info on World Access of the Blind head here