El Capitan in Yosemite National Park is a towering, completely vertical slab of granite measuring 900 metres in height from toe to tip – that’s only 78 metres shorter than the highest mountain in England. It’s a monster of a wall that’s regarded throughout the climbing world as the sport’s pinnacle, its Holy Grail.

That Holy Grail is currently firmly in the hands of Alex Honnold, a 32-year-old from Sacramento, California, and he’s been sipping from it since the morning of June 3, 2017 when he climbed the iconic wall, not only in a phenomenally quick time of just three hours 56 minutes but by a method of climbing called free soloing. That is climbing without a single rope and completely unaided. It means if you slip, you fall, more often than not to your death.

Freerider, as Alex dubbed it, was an unprecedented achievement that suddenly brought freesolo climbing to mainstream media. Alex made headlines throughout the world and was even invited onto late night talk show Jimmy Kimmel Live as part of an eclectic line-up of guests that also included 50 Cent… of all people.

Tommy Caldwell, a highly distinguished climber himself, called Alex’s feat “generation defining” and equated it to the “moon-landing’” of free soloing, while climber and filmmaker Jimmy Chin who was there to witness it, called it “one of the greatest athletic achievements of all time”. It has elevated Alex to the very top echelon of climbing, putting his name right up there with the greats.

Watch Alex climb on Youtube and it’s mind blowing – chilling even. His abilities appear truly super human. So what makes him so unstoppable? How is he managing such incredible feats?

First of all, it’s unarguably his dedication to a task.

“The crux of Freerider involves what’s basically a karate kick,” Alex tells me during an interview at a London climbing wall where he’s launching The North Face’s Walls are Meant for Climbing campaign. “It’s just one little section of the wall, I knew it would be the hardest part and it was, but it went pretty smoothly because I’d prepared quite a bit.

“Quite a bit” is a hell of an understatement. You won’t find anyone who knows El Capitan better than Alex Honnold. After all, this is the guy who in 2012 made a roped climb to the top with his friend Hans Florine in just two hours and 23 minutes. It was a speed ascent record that still hasn’t been broken.

“It [Freerider] was sort of on the back burner for a number of years before the climb. It was something I thought about and visualised but wasn’t actively working towards, then I was constantly on it for a year and a half,” Alex says.

In that year and a half, he climbed the route over and over again with ropes, making sure to learn every single twist and turn he would be taking.

And he pushed himself extremely hard to be physically prepared as well. “In the five months before Freerider. I was basically training and doing physical exercise about 35 hours a week, it was pretty much a full time job,” he tells me. 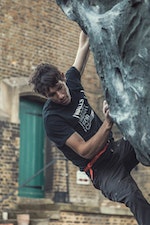 “I would be climbing most of the time and on my rest days I was hiking a bunch or maybe doing easy solo climbs and some finger training alongside. I was doing so much volume in order to be able to work on the wall over and over in the build up without getting too exhausted in the process.”

What about a lack of fear? This is undoubtedly one of the key factors in Alex’s success, but he’s keen to point out that it’s nothing to do with being self destructive or having a deathwish. Instead, it’s all about controlled confidence achieved through that determination and focus he has; by making sure to carefully plan and prepare for each climb so he knows exactly what to expect and how to deal with each situation and problem faced on his way up. 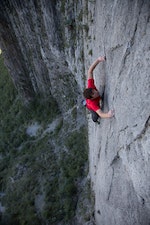 “It’s not so much that I don’t let myself get intimidated,” he tells me. “The thing about climbing is that there’s never any time pressure and there’s no obligation to go and climb anything straight away. So if it seems really scary you can just practice, you can train more and you can work towards it and then only do something when it feels comfortable and natural.”

He must get asked by almost every single new person he meets whether he gets scared during these ropeless climbs, but he really doesn’t mind this curiosity.

“I think what makes free soloing so interesting to the non-climbing public is that it’s so easily understandable and yet so outside of the normal world. People understand that if you fall you die and it’s totally natural to wonder about that kind of thing. I can see for the non-climber it seems totally insane, but the thing is, having been in the climbing world for 12 years and focused my entire life around climbing, to me it all makes a lot more sense. Climbing without a rope on big walls and by myself, it all sort of fits within this greater context of climbing and it’s natural.”

Live to Climb, Climb to Live

Climbing is clearly something Alex still does simply out of passion. He’s just doing what he loves. That’s why he still spends most of the year living out of his van, which is normally parked up at the foot of a wall somewhere in Yosemite (he dryly points out that he definitely does not use the Vanlife hashtag).

He still gets a kick out of the opportunity to travel that comes with his career as well. “It’s been a big part of climbing for me over the years,” he says. “I’ve loved going to new places and seeing new things and a big component of climbing is to appreciate the surroundings. I always enjoy the view, particularly if I’m climbing with a partner and with a rope. It means that every time you’re belaying your partner you’re basically hanging in one spot and you’ll spend that time appreciating the view. But even when I’m climbing by myself I still stop at moments, take my shoes off and rest my toes and look around and think, what a magical place.”

It turns out he’s particularly fond of climbing in the UK. “The thing about the UK is that it has such a strong climbing culture,” he says. “It has such a big gym and training scene and the rock is super developed, you know, any piece of rock that can possibly be climbed has been climbed. And some of the stuff isn’t even rock – you know the sea cliffs that are all crumbly and the chalk cliffs. I guess that’s the charm of it all.”

There’s one question I wanted to ask Alex but felt like I shouldn’t: what’s next for him? How does he top free soloing what’s arguably the toughest and most iconic big wall in the world? The reason I don’t want to ask is because I’m aware of the pressure that surrounds athletes such as himself. People always want more, they want bigger and better, but it seems so reckless to try and pressure more out of someone in a sport where the likelihood of death is so terrifyingly high.

I don’t ask him what’s next, but in the course of the interview he says something that could be interpreted as a suggestion that there’s more to come:

“When I was a kid, my big goal was to climb 5.12, basically a grade that’s now totally trivial for me,” he replies when asked if he had such grand ambitions as El Capitan when he was younger. “That’s the thing about setting goals, you set something that seems impossible and then you work towards it, you eventually do it and then choose something bigger.”

The North Face record breaking climber Alex Honnold kicked off the global Walls Are Meant For Climbing campaign in London this month, aimed at increasing the accessibility of the sport and bringing the climbing community together.

“I’m always scared because slopestyle courses get bigger every year. But that’s why it’s fun...."

From cameras to backpacks, ponchos and even a guitar, here are ten bits of backpacking gear you shouldn't be without when you travel

Backpacking Gear | 10 of the Best Bits of Adventure Travel Kit

Andrew Foster, from Wales, was killed after a slab 40 metres tall and 19 metres wide fell from El Capitan.

Watch the live launch of the latest GoPro camera

Looking to get a bushcraft knife for your outdoor adventures? Do some reading first.