If you love climbing, there’s a good chance that over the years you’ll have either sent or received a climbing meme on a WhatsApp group. If you’ve been into climbing for a while, you’ll almost certainly have seen a climbing meme or two on one of earth’s countless social media platforms. And, that’s alright. The modern world, to some extent, revolves around the creation of memes. Great memes, bad memes, confusing memes that stop you in your tracks because, well, they don’t really make much sense; yes, memes are arguably the hieroglyphics of the 21st century

Like the Ancient Egyptians before, some climbers have embraced the visual language of memes to communicate with other individuals in their culture. Why have they done this? Banter. Historians will, if they’ve got any sense about them, put it all down to good old fashioned banter. Nobody’s changing the world with a climbing meme, but someone might just spread the gift of ‘lols’ and that’s 100% OK with us. Anyway, this introduction has almost certainly gone on long enough. In short, we’ve scoured the internet and rounded up some of the best climbing memes in history. You might say… they rock.

Right, that’s enough words out of us for the time being. It’s time for memes. It’s time for a whole bunch of memes that rock climbers, and only rock climbers (probably), will truly appreciate. These will crag you up. Well, they might not but they’ll almost certainly be pretty relatable. Enjoy them. Enjoy the memes.

The greatest ever rock climbing memes 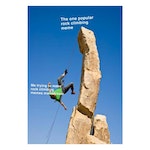 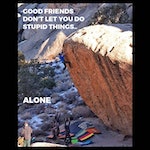 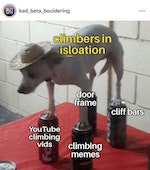 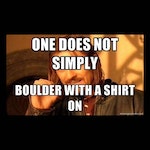 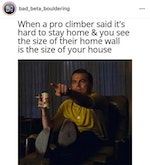 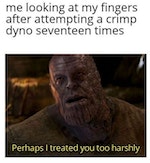 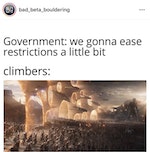 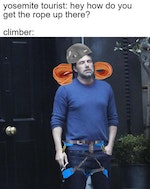 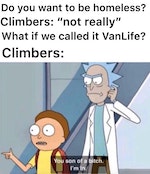 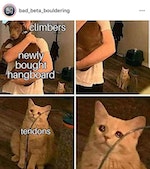 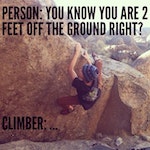 That’s enough memes about climbing for now. You’ve likely have some work to be getting on with and, honestly, we’re not sure how much more time we can spend googling climber memes. It is time to move on. Go climbing, go read a book, just stop looking at the internet (for a little while, at least). And, please, don’t worry. The wheels on the meme-bus will keep on turning even when you’re logged off, the memes, it’s clear, will never die.

A Guide To Via Ferrata In The UK

Mountain Biking Memes | The Best of the Best

21 Climbing Puns That Are Really Going To Rock Your World

gallery Listicle
We use cookies on our website to give you the most relevant experience by remembering your preferences and repeat visits. By clicking “Accept All”, you consent to the use of ALL the cookies. However, you may visit "Cookie Settings" to provide a controlled consent.
Cookie SettingsAccept All
Manage consent