We could see the wall they call ‘The Horse’ from the comfort of our alpine hut’s bar. It loomed in the distance; a huge vertical slab of rock about 200m metres in height, casting its long shadow over the green, alpine meadowland below.

“You see that big one? That’s what we’re going up,” our mountain guide told us with alarming nonchalance. With only a little via ferrata experience under my belt, I was feeling a little anxious by this objective. “Are we really going to be able to climb that?” I asked. His response gave no reassurance: “I don’t know, I’ve never tried it.”

“Are we really going to be able to climb that?”

Via ferratas, or klettersteig as they call them in Austria, are exposed routes that are navigated using fixed cables, rungs and ladders. They’re largely associated with the First World War, when soldiers of the opposing Italian and German armies created vast networks of them throughout the high mountains in order to secure vantage points. Most of these still exist, only now they’re used purely for pleasure – if you can call it that.

Here within the Rofan range of Austria’s Brandenberg Alps, the klettersteig are found all over the place. The solid, textured limestone makes for the perfect environment for it – good for fixing reliable bolts and good for reliable hand and footholds. The routes here are surprisingly convenient to access as well. Our transfer from Munich airport the day before had taken less than two hours, followed by a short ride on the cable car up to the Erfurter Hütte, our traditional alpine lodge for the weekend. Fly in to Innsbruck and you’re just an hour’s bus ride from the cable car.

I’d done some via ferrata routes before, but not deliberately. It was on a two-week trek through the Dolomites a few years ago with friends. We hadn’t expected to encounter these kind of routes, but there turned out to be plenty, and we had no option but to take them all on without any of the necessary equipment – in other words, without anything to stop us from falling. That wasn’t much fun.

This time, as I stood at the foot of what looked to be a totally implausible route for a human being to take on, the Achensee 5 Peaks, I was glad to have the full works: helmets, harnesses and ‘cow’s tails’ carabiners.

In one of those, ‘just-don’t-think-about-it moments’, I clipped my via ferrata set onto the cable that had been bolted into the limestone and then followed it upwards towards an overhang about five metres above. Where it went from there, I’d have to find out.

After 10 minutes of climbing I looked down to see air below my feet – and a lot of it. I’m a hiker, not a climber, and I’d never been anywhere near to this far off the ground before. It was a strange feeling, hanging there with one sweaty hand gripping the metal cable and the other hooked desperately into a crack in the rock. 30 minutes later and the drop below me had tripled. 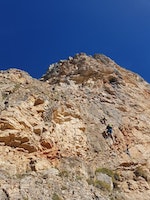 Via ferrata climbing might be much, much, easier than roped climbing but it can still require a lot of strength in your arms and legs (and a lot of focus as well). If you get it wrong you can still really hurt yourself doing this. At times, you can travel up to six metres along a section of cable without having to unclip and re-clip your carabiners onto another section. What that means is there’s the potential for a six-metre drop before your free-fall is halted. The likelihood then is that you’ll slam into the very hard rock, or into another person.

There were ladders and rungs, but most of the climbing involved hauling ourselves up the cable, placing our feet into any cracks or indents we could find. One section was a horizontal traverse across a wall, perhaps 100 metres up. Rods had been drilled into the rock and we had to leap between them to skirt around the rockface.

“It allows those without the technical skills, like myself, to access places that would normally be out of bounds”

After around an hour of climbing, maybe more, we were all at the very pinched top of a peak only a few metres wide. The whole of the Brandenberg Alps and more was sprawled out before us, a jungle of jagged limestone.

That’s the beauty of via ferratas. Some climbers will look at it as cheating, but it allows those without the technical skills, like myself, to access places that would normally be out of bounds. And using your own strength and a bit of precision to access something that had appeared so inaccessible – it’s an amazing feeling; complete exposure, intense focus and your adrenaline going into overdrive.

Despite being severely underprepared when I’d first tried via ferrata climbing those few years previously, I’d still got a big kick from it all. And this time, on this trip to the Austrian Alps, I realised it’s actually even better when you have equipment to prevent you from falling to a certain death.

A Guide To Via Ferrata In The UK

Best Via Ferrata Routes In Europe

inspiration via ferrata
We use cookies on our website to give you the most relevant experience by remembering your preferences and repeat visits. By clicking “Accept All”, you consent to the use of ALL the cookies. However, you may visit "Cookie Settings" to provide a controlled consent.
Cookie SettingsAccept All
Manage consent