Longboarders will skate anywhere, as the thriving skate scenes in the unlikeliest of destinations (think war-torn Kabul or errr… rain-ravaged Stockport) prove.

There are definitely easier cities in the world to be a longboarder however. It might be the architecture, the emptiness of the streets, the friendliness (or at least, lack of hostility) of the police or even just the weather, but some places are just better than others. We’ve teamed up with Penny skateboards, who’ve just released their first longboard, to select a few our favourites.

If you’re lucky enough to live in one of these places, good on you. If not, think of these as a bucket-list of must-visit holiday destinations. These are the best cities in the world to longboard in.

Cape Town is a surf hotspot, so naturally many of its residents longboard when on land. It has a wonderfully skate-friendly climate (it gets more sunshine on average than Athens or Madrid), hills around the town and a long seafront promenade that’s great to roll around.

If you needed any more convincing to visit, they’ve also just built a brand new skatepark in the city centre, should you want to mix up with cruising with kickflips. 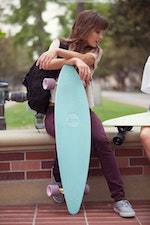 Portland can legitimately lay claim to being the most skater-friendly city in the world. There are “skate lanes” next to many of the town’s bike lanes so you can longboard to work if you like.

At one point the city even boasted a skateboarder, Tom Miller, as the head of the Transportation Bureau. The weather might not be the best for pushing along the pavements (it rains for about 150 days a year) but you can’t fault the locals for effort.

It’s safe to say that Seoul, the capital of South Korea, probably wouldn’t be on many longboarders’ must-visit lists… at least not yet. But it should be.

As the documentary above shows, the Korean’s penchant for building in marble and concrete means the city is like one massive skatepark, making cruising on four wheels easier than riding a bike.

Not only that, but there are no laws against skateboarding or longboarding so you’re unlikely to get busted. No wonder it’s home to an ever-growing scene.

Malaga may have a reputation as a den of Club 18-30s debauchery, but it’s also a great place for a holiday if you’re into longboarding. Primarily because it’s hot: The southern Spanish town gets an average of 11 hours of sunshine a day in July and August.

It also boasts broad expanses of open concrete (particularly along the sea front, see above) and there’s plenty of potential for hill-bombing on the hills of rural Andalucia around of town. Just make sure you steer well clear of the sunburnt, fish-bowl swilling Eng-er-land fans.

Like Portland, Malmo’s climate means it’s not a natural freewheeling Mecca. It rains for an average of 169 days a year and snows frequently in winter.

However its long summer days (think 17 hours of daylight) and plethora of smooth pavements mean it’s an amazing place to roll around in the summer. It is something of a centre for Swedish skateboard culture too, as home to a whole series of awesome skateparks and several international contests.

As anyone who’s seen the smash-hit Netflix series Breaking Bad will know, Alburquerque, New Mexico, is hot and dry. This, combined with its acres of smooth pavement and plethora of hills, make it an unlikely longboarding hotspot.

It might not be top of many people’s must-see destinations in the US, but if you’re ever heading there, make sure to pack your cruiser.

Rio de Janeiro is rightly famous for its beaches and promenades, but what’s perhaps less well known is that the roads and cycle paths along Copacabana can Ipanema beachfronts are perfect for longboarding.

The sport is huge in Brazil, with the locals specialising in a kind of longboard freestyle that looks a bit like dancing. Oh and there are plenty of hills to bomb too, should you tire of skipping around the sea front.

No list of the world’s most skate-friendly cities would be complete without a mention of Barcelona. The Catalan capital has been at the epicentre of Europe’s scene for decades thanks to its warm climate, large expanses of concrete (especially round the port area) and famous skate spots.

An anti-skateboarding law passed in the mid-2000s made things slightly more difficult but in practise there are so many great spots to cruise that the city is still a top destination for longboarders.

The city of angels is where the story of skateboarding (and longboarding) started, and it remains one of the best places in the world to roll around on four wheels. The sheer length of LA’s skate-related history means that the city boasts more legendary spots than any other town on the planet.

Combine this with one of the most famous skateable promenades in the world and with an average annual rainfall of just 380mm (compared with over 1,000mm for Manchester) LA’s climate is pretty much perfect for it. 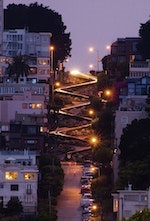 There can be few – if any – better places in the world to go longboarding than San Francisco. OK so the city might not be as rain-free as its southern Californian cousin, but what it lacks in the climate stakes it more than makes up for in the quality of its hills which are quite simply legendary.

Who wouldn’t want to bomb the hills where Steve McQueen filmed Bullit? Or where Sean Connery escaped the clutches of Nicolas’ Cage’s FBI agent in The Rock?

And that’s just the straight hills – the top part of Lombard Avenue is practically a perfect slalom course. Yep, if you’ve got a love of longboarding SF is the place to go.

Penny Skateboards’ new longboard, a 36″ long model, is perfect for street cruising and great to take on any skateboard trip. Get yours at Pennyskateboards.com

Love Mario Kart? Then This Badass Longboard Edit Is An Absolute Must Watch

These Guys Went Skateboarding… In Acres of Cannabis

The 6 Deadliest Waves in the World

These are so terrifying, you'll soil your wetsuit

This video will make you smile like a false killer whale.

Watch: How Cycling is Transforming Women's Lives in Afghanistan

"This is not normal, girls riding bikes. They’re taking a risk..."

article inspiration list
We use cookies on our website to give you the most relevant experience by remembering your preferences and repeat visits. By clicking “Accept All”, you consent to the use of ALL the cookies. However, you may visit "Cookie Settings" to provide a controlled consent.
Cookie SettingsAccept All
Manage consent