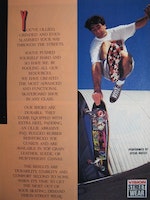 Steve Rocco was unlike any skater who came on the scene before him. A skilled, charismatic and business savvy freestyle skater he introduced a punk and offbeat style of skate company management.

He founded a new company called World Industries with Rodney Mullen in 1989 which helped to popularise street skateboarding. His advertising style was particularly popular. World Industries weren’t afraid to belittle and ridicule their competition but they proved extremely successful with customers. In just a few years Rocco and Mullen had built the most successful skateboarding company of the 21st century.

Rocco’s story is told best in the documentary The Man Who Souled the World which tells his journey from up and coming amateur skater to becoming the co-owner of one the biggest skate companies ever. Rocco has been retired from the skate industry for a few years having sold World Industries and although he was considered a geek by his peers in the 80s, Rocco went on to define skateboarding for the next 20 years.