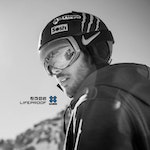 Kevin Rolland was born on the 10th of August 1989. He’s a French freestyle skier, who specialises in pipe. If you’re not familiar with Kevin’s work, let’s just say that he’s really really really really good at skiing. Give this dude a halfpipe and, boy oh boy, will he give you a show to remember. Is he the greatest skier on the planet? It’s a tough call, but he’s certainly right up there.

Since winning gold at the 2009 FIS Freestyle World Ski Championships, Kevin has won more critical acclaim and medals than you’ve had hot dinners. X Games success, Olympic success, and an ability to touch the sky like a superhero; there’s so many positive things one could say about Rolland and his skiing that we thought it was about time someone gathered all those things in one place. This is that place. This is Kevin Rolland; LifeProof ambassador, and all-round mega dude. If this guy wasn’t your favourite skier before today, he will be by tomorrow.

What words can you you use to describe Kevin Rolland’s gold medal winning run at X Games Aspen 2016? Awesome. Great. Brilliant. Excellent. Superb. Epic. Mind-melting. Sensational. Spiffing. Fantastic. Magnificent. Marvellous. C’est bon. C’est parfait. Yep, all of those words and another 300 superlatives that we probably don’t have room for here.

Kevin Rolland bagged the X Games gold medal, beating Kenworthy who held top spot at the time, with a score of 93.33. The surprised, vaguely self-deprecating, look on Rolland’s face when the big score and its consequences sink in just adds to all the wonderful feel-good magic on show. A super moment in superpipe history; get this out whenever someone questions Rolland’s credential.

Some athletes feature in the X Games history books almost as frequently as Harry Potter features in the Harry Potter books. This group of elite athletes, within which Kevin Rolland can include himself, have become synonymous with the X Games by stamping numerous accomplishments on a consistent basis. When it comes to action sports, one hesitates to use the term “household name” but K.R’s various career triumphs make him undoubtedly one of the biggest deals in town.

Nine, count them, X Games medals for Kevin Rolland since his first in 2010. Nine! That’s almost ten. And, between you and me, that’s about as high as we can count at Mpora. If you’d like to see Rolland’s gold medal effort at X Games Tignes (Europe) 2011, get the appropriate video (see above) inside your eyeballs immediately.

Monsieur Rolland, we salute you.

3) He Scooped Bronze At The Sochi Olympics 2014

“Pah! Bronze. Who even gets out of bed for a bronze medal?”

OK. OK. Easy there, cowboy. Let’s get one thing clear. Winning an Olympic medal, of any colour, is a seriously impressive achievement. We can’t speak for everyone reading this, of course, but personally speaking – I’ve never won one and nor have the people sitting either side of me. In fact, whisper it quietly, there’s not even a solitary Olympic medal winner in the entire building.

Standing on the podium, and getting your hands on a shiny chunk of precious metal, after an Olympic event has to be one of the finest things a sportsperson can do in their career. Seeing your nation’s flag hoisted up, while your fellow countrymen and women watch on screens and say nice things about you; well it’s enough to bring a tear to your eye just thinking about it.

In an age when competitive freestyle skiing has never been more competitive than it is now, Kevin Rolland’s bronze medal success in the Half Pipe at Sochi 2014 is worthy of thunderous applause. THUNDEROUS. APPLAUSE.

4) He’s Got A Cool Nickname

It’s fair to say that, in the UK especially, Kevin isn’t exactly a name you’d associate with the word “rad.” In fact if Kevin Rolland worked in Accounts, Insurance, or HR Administration his first name would just be another disadvantage in his pursuit of sub-zero coolness. The good news, for all concerned, is that Kevin Rolland is so sick at skiing that cartoon thermometers actually go fully red and then explode whenever he’s nearby.

Rolland’s ability to send it big, and serve up sensational “flippity-whip-whip” tricks, has led to him being dubbed ‘The Flying Frenchman.’ Of course, we all know that people who give themselves their own nicknames stink of desperation and neediness. However, as it is with Rolland, imagine being so good at something (in this case, skiing) that people give you a nickname and make it stick. Yeah, that’s just a big old spoonful of awesome sauce.

5) He’s Skied Down A Bobsleigh Track

Remember Cool Runnings? Of course you do. It’s one of the finest films ever made. Step aside The Godfather Part II starring Al Pacino, John Candy’s coming through and he’s brought the entire Jamaican bobsleigh team with him. Why exactly are we discussing the universally-loved sports movie Cool Runnings? Because, and this is the key bit, we’re also planning to discuss this brilliant ski-chase film featuring Kevin Rolland and Julien Regnier.

Fast Forward, with its fairly loose plot focusing around a mobile phone theft, contains adrenaline-pumping chase segments, gnarly tricks aplenty, and an audacious bobsleigh segment that couldn’t be more audacious if it was simultaneously part of a high-profile diamond robbery. If you’ve never seen it before, watch it now. We guarantee that you won’t be disappointed. If you have seen it before, watch it again. It’s probably the most entertaining six-minute ski film, that doesn’t feature Candide Thovex, ever made.

Arguably less well known than the French Revolution that resulted in the decapitation of Marie Antoinette, the French Superpipe Revolution is still a pretty big deal. It’s not a thing you can necessarily pinpoint to a single date, or person, but its impact on the world of freestyle skiing and the ripples that came after it are still being felt now.

Kevin Rolland, as a bonafide champion of pipe and born Frenchman, is clearly a significant figure in what we’ll dub the FSR for ease (because typing the French Superpipe Revolution over and over again gets seriously tiresome). Other massively influential freestyle skiers, and fellow countrymen of Rolland, include Candide Thovex, Julien Regnier, and Joffrey Pollet-Villard. Vive la France! Vive la FSR!

While we mull the admittedly unlikely possibility that Rolland’s middle name is the craziest coincidence in the entire history of coincidences, why not spend your time watching Kevin’s videos and analysing the enormous air contained within them. There’s a reason ski fans call him ‘The Flying Frenchman’, and it’s not just because of his fondness for “speedy boarding” passes.

8) In 2011, He Was Nominated For The Best Male Action Sports Athlete ESPY Award

Kevin Rolland didn’t win the 2011 ESPY Award for Best Male Action Sports Athlete, he’s too cool for that. Shaun White, the Flying Tomato, won it that year. However, we think the fact that he was even nominated proves just how widely respected he is.

Maybe Kevin will win this award one year, maybe twenty years from now he’ll go full-on Leonardo and star in a Revenant-style skiing film. Whatever happens from here on in, we think the fact that KR is getting nominated for stuff like this is just another tick in the column marked ‘Reasons Why Kevin Rolland Is Great.’

Having the ability to make a variety of different hats look good might not sound like the greatest skill in the world, but anyone who’s known the oh-so-real pain of having a head that’s not aesthetically-compatible with hats will tell you precisely what a big deal this is.

Kevin Rolland wears hats like an absolute boss. Winter hats, summer hats; you name it, Rolland’s worn it and worn it well. When you’re making a name for yourself in action sports, like Kevin has been since the start of the decade, this is the fine margin that separates the greats from the greatest. Kevin, you hat-wearing legend, what’s your secret?

When he’s not skiing, Kevin Rolland likes to spend his time Free-Diving. His record is a lung-busting, and genuinely impressive, four and a half minutes. The fact that he’s found time to be really good at something other than skiing, shows just how naturally good at skiing Kevin Rolland is.

Kevin is like that kid you went to school with; the one who simultaneously played lead guitar in the school band, captained the school football team, came top in all of the spelling tests, and won the science competition. Is there anything this guy can’t do?

12 Reasons Why Skiing Is Cooler Than Snowboarding

Candide Thovex One of Those Days 3 | Watch the Full Video

The great outdoors and Instagram, don't believe what you see...

35 Reasons You Should Never Go Mountain Biking in Scotland

...It's just not really worth the effort

35 Reasons You Should Never Go Mountain Biking in Scotland

Even if you love skiing, you have to admit that it's far from perfect.

The people who live the ultimate adventure hippie lifestyle get together for one day a year....

Essential | 10 Secret Camping Hacks That You Never Knew You Needed

10 secret camping hacks that you never knew you needed

10 Secret Camping Hacks That You Never Knew You Needed

Do one thing every day that scares you