Ski and snowboard movies are great, but it’s fair to say that they normally follow a pretty predictable formula.

There are some things that are almost guaranteed to happen in any snow-based epic that you watch. So, next time you break out a shred-heavy feature, get a couple (hundred) beers out with it and give this game a shot.

Disclaimer: Mpora takes no responsibly for any health problems that arise from this game, nor for any stupid shit that participants get up to after/if they manage to complete it.

Do not play this game if:

a) You are pregnant or have a history of health problems

b) You do not have a limitless stash of beer

c) You have any common sense whatsoever

1. The words sick, gnarly or stoked are used

2. Someone shouts ‘bluebird’ or ‘powder day’ whilst in bed, in boxer shorts or while opening curtains

3. A song plays that you’ve heard in at least two other snow films

4. There’s a dramatic shot of a wild animal

5. A rider talks about how the true spirit of riding is all about fun 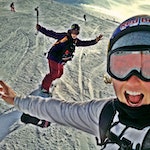 6. A rider says that something they did was the ‘scariest/gnarliest/craziest thing they’ve ever done’ (delete as appropriate)

7. A rider talks about how lucky they are to do this for a living

8. A rider unsubtly hints at how much they hate riding competitions

9. There’s a shot of an avalanche

10. A rider talks about the importance of mountain safety, then drops into a ridiculously unsafe line

11. The narrator says something really vague about life that doesn’t actually relate to snow sports at all

12. You catch even a glimpse of a chairlift. This is a rare moment in a ski/snowboard film

13. There’s a weather forecast on screen

15. Someone cannonballs or deliberately face plants into powder

1. Two out of these three words – sick, gnarly or stoked – are used in the same sentence 2. There’s a shot of someone riding away from an avalanche

3. There’s a scene-setting clip where riders just drag suitcases around for a couple of minutes

4. You’re the last person to say ‘cheers’ whenever a beer is on screen

5. You fail to raise your glass when a rider needs medical help

6. The riders first break out the helicopter

7. A rider snaps a branch with a huge board tap

8. A line or bail makes you say: “shiiiiiiiit” 9. Someone drinks a Red Bull

DOWN YOUR DRINK WHENEVER:

1. The song ‘Sail’ by AWOLNATION plays

3. It reaches the point in the film where you want to cry because you’re not in the mountains

4. Any Time Someone Points At A Map And Says “We Should Go Here”, To The Shock Of Everyone Else In The Room

5. The words sick, gnarly and stoked are all used in the same sentence

What Does Your Facial Hair Say About You?

A Huge Artificial Ski Slope Was Being Built in London… So What Happened?

Maybe it's because I'm a Londoner, that I love indoor snow...

A Huge Artificial Ski Slope Was Being Built in London… So What Happened?

olympics
We use cookies on our website to give you the most relevant experience by remembering your preferences and repeat visits. By clicking “Accept All”, you consent to the use of ALL the cookies. However, you may visit "Cookie Settings" to provide a controlled consent.
Cookie SettingsAccept All
Manage consent