In the summer of 2013, Londoners were told they would be getting their very own ski centre and that it would be ready by 2015. Since the story broke, however, it’s all gone a bit quiet. Too quiet.

One quick Google of the subject shows you that the majority of articles about the dome are dated from last year. With that in mind, I thought it was about time we all started discussing it once again.

Just imagine, if it got built,  how great our lives would be. Just imagine. Imagine…

Boris On Board. Literally.

Boris Johnson snowboarding directly into a small toddler would be an absolute tragedy…for the toddler. But for BoJo, it would be another inexplicable political triumph. We’ve seen it all before.

Realistically, Boris won’t be Mayor by the time the ski centre is finished.  Despite this inconvenient truth, I hope the organizers can see past it and reserve big old blondie a spot at the grand unveiling.

This ambitious project will cost an estimated £200 million which is, of course, a lot of money to be forking out. On the flip side, can you really put a price on the entertainment value of Mr. Johnson doing something completely ridiculous? 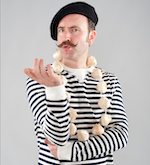 We see you Paris. We see you over there with your plans for a £40 million ski centre of your own. And, guess what, you can’t have one.

Well, I mean, obviously you can have one. I have no jurisdiction in your city and am utterly powerless to stop you building whatever it is you want to build. But don’t think for one second that means you’re getting a multimillion-pound ski centre. You’re not getting one. Not before us anyway. It just wouldn’t be fair. It wouldn’t be cricket!

Firstly, you’ve already got The Alps (quite a way away, I’ll admit). And secondly, London is the better city. Doesn’t the better city deserve better things?

Sure, we could just leave each other alone and build our own domes at exactly the same time but in that scenario nobody wins. And, more importantly, nobody gets that sweet, sweet feeling of superiority.

You’ve got Disneyland Paris; let us have Winterland London.

Having a ski centre in London doesn’t necessarily mean we’ll suddenly start topping the medal charts at the Winter Olympics, but it’s a start. The centre would provide a gateway into snow sports for millions of young people in London, and give our capital’s most talented prospects the chance to hone their skills on a more regular basis.

Austria, a country that has won more alpine skiing medals than any other nation, has a population of 8.474 million people. London, on the other hand, has a metropolitan area of over 13 million inhabitants. You do the maths.

Granted, access to one large ski centre isn’t the same as having access to all those amazing mountains, but it’s better than not having a ski centre to begin with.

Londoners Can All Stop Going To Hemel Hempstead & Milton Keynes

Lest we forget that, in 2013, Hemel Hempstead was voted ‘ugliest town’ in the UK.  To put that into some sort of context for you, Luton and Slough were voted second and third.

You know that old saying? The one that goes “If the mountain won’t come to Muhammad then Muhammad must go to the mountain.”? Well, I’ve got a new saying for Muhammad and it goes something like this: “If the mountain is in Hemel Hempstead, just stay exactly where you are and build a bigger one in East London.”

The less said about Milton Keynes, the better.

The most exciting thing about the London ski centre proposals, and the main reason it needs to happen, is the sheer scale of the project. Seriously, have you looked at the plans? I mean, really looked at them. They’re incredible.

If it ever gets built, the longest run at the centre would be a staggering 300 metres. That’s twice the length of the biggest one in the UK or, to put it another way, the length of three football pitches put back to back.

20,000 square metres of piste would be covered with thousands of tonnes of “real” snow and the site, upon completion, would expect to get up to three million visitors a year.  Whichever way you spin it, the numbers are absolutely outstanding.

This one goes out to all the people responsible for making this project a reality.  Stop dawdling about and get it built! You’ve given Londoners a delicious glimpse into the future and, guess what, the future excites us.

Sure, there are probably better things for the financial fat cats to be spending money on. Like, I don’t know, hospital wards, charities, and social infrastructure.  That being said, I’ve been to a hospital recently and they’re not that much fun.

Incredibly important, don’t get me wrong, just not as enjoyable as an indoor snow centre with kickers, toboggan runs, ski slopes, and an ice-rink.  For the record, this project is being funded by shopping centre developers Westfield.

What do we want?  A-gargantuan-winter-sports-paradise-with-lots-of-cool-features!  When do we want it?  As soon as possible, if you’d be so kind!

Bored Of Commuting? Next Year You Could Be Able To Get To Work By Trampoline

Britain Is Officially Falling In Love With Skiing And Snowboarding, According To New Research

From Russia With Love: how the Sochi Effect' is boosting UK snowsports

Britain Is Officially Falling In Love With Skiing And Snowboarding, According To New Research

olympics
We use cookies on our website to give you the most relevant experience by remembering your preferences and repeat visits. By clicking “Accept All”, you consent to the use of ALL the cookies. However, you may visit "Cookie Settings" to provide a controlled consent.
Cookie SettingsAccept All
Manage consent