In one corner, you have snowboarding. In the other, you have sitting on the sofa and watching television. From a health point of view, the physical act of snowboarding might seem like a far healthier thing to do. But alas, anyone who’s even spent just a few nights immersed in snowboard culture will know that there’s not much in it. Binge-drinking, excessive quantities of pizza, and some other stuff we won’t go into here makes chain-viewing ‘Rick and Morty’ while eating an entire multi-pack of Real McCoy’s look relatively tame in comparison.

Anyway, that intro leads us neatly (or messily, depending on your viewpoint) onto these snowboard graphics inspired by a variety of TV shows. We’re not going to lie. The Simpsons feature heavily. 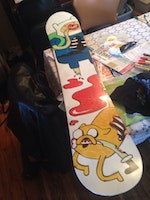 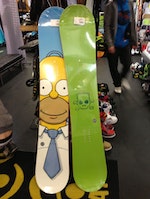 8) The Simpsons (One More Time) 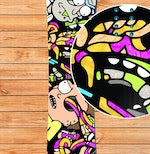 Here are just a few ways to take your two-wheeled life to the next level in the new year...

New Year's Resolutions | 17 Challenges Every Cyclist Should Attempt in 2018

This month is all about adventures for the whole family

Fogging Up | Camping in Bothies with Kids in English Winter Weather

Two mothers, five kids, and a lot of mist. What could possibly go wrong?

Camping with Kids in Winter | A South Downs Bothy Adventure