You know those Facebook videos where you’re desperately moving your phone up, down, left and right to try and find the main subject matter, only to realise that you’ve missed all the action of the video? Yeah, those painful ‘virtual reality’ videos are what people usually think of when 360 cameras are mentioned. However, 360 cameras give the ‘shoot now, frame later’ option – a handy trick for filming action sports, and one of the reasons many people see so much potential in them.

If you’re spending your time on this wonderful website, then I’d be happy to wager a bet that you may just be into an ‘adventure sport’ of some sort. Skiing, climbing, trail running, hiking, surfing, it doesn’t matter what sport you’re into, there’s nothing better than capturing a load of content to show off to your mates what a pro (or punter) you’ve been on your most recent trip.

A big problem with action cams is the need to constantly change mounting positions to keep things interesting  – it all soon becomes pretty boring to just stare at the same angle for the length of your video.

The beauty of 360 video lies not in the gimmicky virtual reality experiences they offer. No, it lies in the fact that you can just turn the camera on, press record and have all the fun your heart desires. Once back home, you can then frame your shot whilst you’re going through and editing your footage. There’s no real worry of missing any action, just point and shoot.

Insta 360 have given you the ability to capture and frame your shots after you have taken them by shooting a 360° view around the camera through two fisheye lenses on the front and back of the camera.

The software within your PC or app is then able to stitch together the footage that the two lenses capture, to create a sphere of your nearby surroundings. You’re then able to look around and frame the sections of this sphere that are the most interesting.

The following resolutions and frame rates can be shot on the Insta 360 One X:

The stabilisation on the Insta 360 One X is sick. They call it ‘FlowState Stabilization’. Make of that what you will, but all we know is that it works. Even when charging down the piste, trying to keep up with Henry Shackleton, the Insta 360 One X was able to smooth out almost all of the inevitable chatter that ensued whilst I hurled down a mountain side with this camera extended out in front of me, who needs a gimbal these days?

Insta 360 have worked more magic with their ‘Invisible Selfie Stick’. As the name suggests, they have managed to remove the pole from any film or photos that you take whilst using the selfie stick. This gives you a drone-like angle to your shots and a welcome change from the usually flat angles that you get from mounting your camera to your helmet, pole, dog, eagle or any other object you can get your hands on (I’m actually very jealous of those GoPro eagle shots). 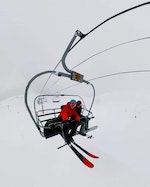 Tiny Planet is another interesting feature packed into this 360 device and one that I’ve not yet decided whether it’s a gimmick or not. Tiny Planet essentially lets you zoom the sphere out to make it look like you’re standing on your own little planet.

Whilst I’ve found that this angle is a little too much for video use, it’s a great way to capture some quirky photos, on chairlifts, or standing on little summits, where you can really push the vertigo inducing angle.

Encasing all of the geekery that allows for the unique angles to be captured, is a pretty slim design. Surprising, given the amount this camera punches above its weight.

GoPro have gone for the more ‘compact’ design with the Fusion, Insta 360 have a taken a more elongated approach to the design. The camera is much taller (41mm to be exact) than the Fusion, but skinnier and narrower.

The Insta 360 One X only weighs a measly 115g with the battery in, whilst the Fusion weights 220g – something you’d want to bear in mind if you’re going to strap these things to your head.

This weight difference is made clear when you take a look at the battery capacity of the One X (1200 mAh), compared to the Fusion (2620 mAh). Although the smaller battery size, you are still able to swap out the batteries in the One X. Insta 360 claim that you’re able to get 60 minutes of filming out of a single charge, however I found this to be less, probably due to the cold conditions found out in the French Alps.

The two lenses stick out of the casing of the camera quite a bit, just like with the Fusion. This meant that you have to be super careful when moving the camera around to make sure that you don’t scratch either of the lenses. Insta 360 provide you with a carry case for the One X, but this is just a soft neoprene case which didn’t offer too much protection, we preferred the hard case of the Fusion.

Speaking about the case, it’s got to be said that you have to be careful not to accidentally press one of the buttons as you’re stuffing your camera into your pack. Because of the soft nature of the case, it’s pretty easy to accidentally press one of the two buttons on the frontside of the camera which can switch the camera on, only to find a drained battery when you next reach for the camera.

Just one more point on the boring hardware side of things. Both the Micro USB and Micro SD ports are exposed to the elements, so don’t go getting this thing too wet as it’s not waterproof unless you buy the Venture Case.

The downloadable smartphone app is really what stands the camera out from the competition. The app is super intuitive to use. I was able to get straight in from ski day, download all my footage to my phone and start editing in some cool pans, time lapses and active tracks into my footage like I was some sort of award-winning action sports videographer – right from the palm of my hand.

I wouldn’t bother editing the footage on your computer as long as you have a up to date smartphone. Stitching together and editing 360 footage was a slow process on my laptop, but would be faster if you’ve got a more powerful computer.

I found it much more simple to edit all of my footage through the Insta 360 app on my phone, rather than airdrop the footage over to my laptop and add into any other video footage I’d taken from my drone or GoPro.

By simply pressing and holding down where you’d like the camera to pan to, you can set pivot points for the camera to pan around to in the 1080p format, to make it look like you’re panning a camera for dynamic footage.

To make things even easier, you can also ‘smart track’ objects, humans or animals as they move around the camera, or the camera moves around them and the camera will pan to follow them.

All in, this is a really nice bit of kit that can do everything your GoPro can do, while also having the ability to capture additional 360 dynamic movement to liven up your footage.

You’ll need to manage battery life, take extra care you don’t accidentally turn it or drop it in a puddle (if you don’t plan on using a weatherproof case). All that aside though, if you’re serious about filming your adventures you can’t really argue against the £410 price tag.

The Insta 360 One X will make you look at your editing in a new, creative light where you’re able to capture angles never previously considered possible.

Adventure Tech Gear information inspiration review
We use cookies on our website to give you the most relevant experience by remembering your preferences and repeat visits. By clicking “Accept All”, you consent to the use of ALL the cookies. However, you may visit "Cookie Settings" to provide a controlled consent.
Cookie SettingsAccept All
Manage consent