Megan Sullivan has just had the worst month of her life.

Sullivan’s crazy month began on the day of an important challenge. An experienced climber, she had been training for three years to climb Nose route on El Capitan in Yosemite, with a group. On the day of the actual climb however, something went wrong and she fell a terrifying 50 feet from the rock.

That experience would be enough of a bad month in anyone’s book, but Sullivan’s luck only went downhill from. Two weeks later, she was hit by a car.

Finally, on a routine check up only a few days later, she was diagnosed with skin cancer. After such a bad month of accidents in the outside world, Sullivan would have been forgiven for curling up indoors with Netflix until her unlucky month was over. What she decided to do however, was much more impressive.

With so many close scrapes with death in such a short time, Sullivan says she gained a suddenly clarity about how much time she was wasting not doing things she wanted to do in life.

She packed a bag, decided to get on with things and headed out to visit all seven wonders of the world…. In just thirteen days. 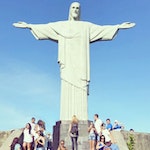 “My friends and family only half-jokingly recommended me to purchase a giant human bubble to live in. But after realizing how expensive and very inconvenient to my dating life that would be, I had this great moment of clarity: I survived.” says Sullivan. “In my lifetime, the greatest learning moments have come at a time of tragedy and loss. From loss comes radical change, for it opens up a space that is yearning for something new.” “After the worst month of my life, I started to rethink how I was living my life. I came to this amazing realisation.”

“The only thing stopping me from having everything that I ever wanted in life was simple: me.” 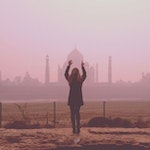 “I would always say, ‘there isn’t enough time or money’ but those were just excuses. What I was really afraid of was failure.”

“I needed to stop thinking that my goals were impossible and start thinking that I have the power to decide how I am going to live my life everyday.” Sullivan’s awesome travels really prove that your outlook can turn any situation from a terrible experience into an opportunity.

Next time something bad happens to us, we’re going to channel Sullivan’s perspective and make something good out of it!

article Travel
We use cookies on our website to give you the most relevant experience by remembering your preferences and repeat visits. By clicking “Accept All”, you consent to the use of ALL the cookies. However, you may visit "Cookie Settings" to provide a controlled consent.
Cookie SettingsAccept All
Manage consent