It’s hard to believe that Hoka has only been on the running scene since 2009. During that time, they’ve released shoes that have become favourites for running communities across the globe. Their product line has something for every type of runner. Witnessing Hoka’s rise up the running ranks has been great, and the brand are showing no signs of slowing up the pace anytime soon.

Their new release, the Mafate Speed 4, provides a smooth trail running experience from the first push to the last stride. It’s a shoe that helps to make technical and tactically-demanding terrain smoother than ever before. The Mafate Speed 4 underlines why Hoka are at the top for footwear in the ultra-competitive trail running industry.

What type of runner is the Mafate Speed 4 for?

The Mafate Speed 4 will be a welcome addition to your running shoe collection. It’s designed for those off-road runners that want to reach the big distances without scrimping on grip and traction. The responsive midsole cushioning system guards against harsh impacts, and provides the right amount of support.

Right from the start, Hoka built a name for themselves with their innovative shoe designs. This trend continues with the Mafate Speed 4. It’s rocking a two-part PROFLY+™ midsole that’s been paired with a responsive layer of rubberised EVA foam underneath. This presents the runner with a cushioned and fine-tuned ride. The outsole construction is created of 5mm Vibram®  Megagrip with Litebase construction and Traction Lug, designed for a grippy control that will combat the most challenging of terrain. It will, in short, stop runners from slipping on surfaces even when the wet stuff is falling.

The addition of a rubber toe cap and a lay-flat gusseted tongue seals the foot securely into the shoe, with rock and trail debris getting deflected away. Breathability and surefooted comfort are provided by a single layer woven jacquard upper mesh, offering total performance at any desired distance. The early stage meta-rocker is designed for the perfect transition through toe-off.

The real star factor of these shoes is in the midsole unit. Bringing a lightweight and responsive feeling underfoot, the shoe is 21 grams lighter than its predecessor. This allows for an enhanced trail running experience, one that will allow the wearer to fly across the paths, woodlands, and rocky tracks they encounter.

“As a keen running enthusiast, I know the challenges trail running can bring, especially living in West Wales, you must be mindful of every type of terrain, from swampy marshlands to the Pembrokeshire coastline. The Mafate Speed 4 from Hoka has been an absolute godsend for my runs here, the performance and feel is on a different level. They are at the higher price range, but if you’re serious about your trail runs and want true comfort on long distances, then it’s these you want on your feet when battling the technical pathways. 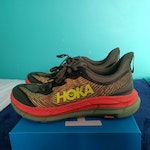 “The one standout thing about the Mafate Speed 4 is the bounce you get, and how easy it is to get into a stride with them on your feet. The Vibram construction and sole technology propel you down the trails. I’ve been taking them on all types of distances. Running a small 5k trail is blissful. It’s a comfortable setup even when you increase the distance, as I found out when I completed a half marathon in them recently.

“The event took place in woodlands, with the occasional muddy track thrown in for good measure, and they performed swimmingly. The cushioning was there from moment ‘go’ till the finish line, with these being some of the most responsive trail running shoes I’ve run in. I can’t stress enough how good the traction is underfoot. It started to rain about six miles into the race, and not once did I lose confidence. The grip came through and got me over the finish line with comfort and clarity.”

For more information on the Hoka Mafate Speed 4, visit the Hoka website.

5 of the Best Trail Running Routes In Valais

26 Running Puns That Will Have You In Stitches

An Interview With Finlay Wild | The Record Smashing Scotsman