‘Follow The Light’ sees Kilian Bron doing what he does best in the spectacularly beautiful, and heart-melting, scenery of Cappadocia in Turkey. If some of this looks familiar, it’ll be because we recently posted an article on Kilian Bron’s GoPro Million Dollar Challenge footage – also filmed in front of a bunch of hot air balloons, in Turkey.

Anyway, buckle up and feast your eyes on this thing. For the project, Kilian spent two whole weeks exploring the region in search of the ultimate spots to put down his tyres and charge.

Film critics and art student types will no doubt like to spend hours poring over the symbolic nature of the light in this edit. The rest of us, meanwhile, can get on with the business of gawking at the vistas, the phenomenal bike-riding, and the, let’s face it, pretty cool armada of floating hot air balloons. Check out the photos, watch the video. Peace out. 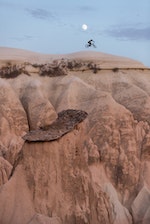 Mountain Biking Memes | The Best of the Best

Mountain Biking Movies | 10 of the Best

Action Sports video
We use cookies on our website to give you the most relevant experience by remembering your preferences and repeat visits. By clicking “Accept All”, you consent to the use of ALL the cookies. However, you may visit "Cookie Settings" to provide a controlled consent.
Cookie SettingsAccept All
Manage consent