When we catch Sam Pilgrim for a quick chat, he’s just finished his first time trial run at Parkour Ride, a one-off multi-discipline event in a multi-story car park in London.

He’s not exactly overawed with his performance in the race.

“It’s very different,” he jokes, with a firm emphasis on ‘very’. “It’s so fun, but we’re riding down a car park and I’m apparently the worst pro rider here on speed. The guy below me is on a fixie and I’m just above him!” 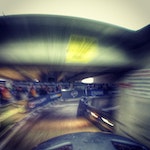 I remind him that it’s not quite his usual slopestyle bash, and that he does have last year’s overall FMB World Title to his name to prove he’s no slouch.

“Yeah,” he laughs. “I think I’ll just take that then and won’t turn into a full-time car park racer.”

“Riding is the best thing ever but comps this year were horrible. I felt super pressurised from last year…”

It’s been a season of up and downs for Sam. Having finished no lower than sixth in the overall FMB rankings since he first competed in the tour in 2010, Sam won the thing in 2013, but struggled to find the form to defend the crown this term.

The rider continued: “Season-wise it wasn’t my best one. Next year though I’m going to go to all of the events again.”

Indeed, the English style star found himself riding at just one stop on the Diamond series this year – Crankworx Les Deux Alpes in July, and he struggled to stomp the runs he was aiming for there.

Despite second place finishes at a couple of high profile events on the continent, Sam admits that the weight of the official number one spot meant he struggled to enjoy competition.

“This year I just felt super pressurised from last year, when I won the whole tour,” he said.

“Riding is obviously the best thing ever but the comps were kind of horrible. Two of them were sick – the Swatch Rocket Air and Prime Line were good – but most of the time it wasn’t actually fun at all.

“It’s alright if you’ve got pressure on you and you do well. But I put loads of pressure on myself and just kept doing badly and it was making it horrible.

“I know I can do all the same tricks as everyone else but I was just thinking about it way too much. I just need to chill out and next year will be sick!”

If you’re looking for any definitive proof that the 24-year-old can stomp with the best of them – and for some reason don’t find last year’s FMB title testimony enough – the latest edit from camp Pilgrim should more than provide the evidence.

Sam may have been struggling in competition recently, but away from the judges gaze he was at his usual best. ‘Homeland’ saw the rider nail some huge front flips, cork 720s and double whips round a sick makeshift set up.

The rider revealed he’s planning a bigger and better edit to come from the same setting soon.

“I really like making videos,” he said. “I do all the editing and stuff myself, and I’m going to make another one soon because I’ve just made those jumps way better as well!

“They’re still super ghetto! But there’s a new drop-in – which I’ve posted on Instagram. It’s still wobbly but that’s how I like it. I’m planning to make a video soon. Hopefully with some cool riders.”

If you’re wondering what a giant, slightly unstable drop-in built by Britain’s best looks like, wonder no longer. Here’s the picture: 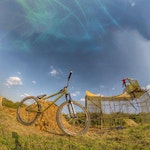 Safe to say that we’re not the only ones looking forward to that edit, and that’s not all Pilgrim has got up his sleeve either.

The rider hosted ‘The Sam Pilgrim Invitational’ last month – the first major dirt-jumping contest to hit the UK since 2007. The comp was just the kind of chilled out affair he loves to ride, and there’s more where that came from as well…

“The NEC [in Birmingham] used to run BMX contests, which was kind of cool but never really fit into the ‘Cycling Show’ it was part of. I’m not sure why it was ever there really.

“So I got the chance to do an invitational and we decided to do a big air with cash for tricks. There was no pressure at all and it just meant that you did tricks and [pro-mountain biker] Blake Samson was there to give out the money. It was well good fun!

“They’ve said that they want to do it again next year because everyone that went really loved it as well.”

With another invitational lined up for 2015 alongside a semi-secret ‘coach road trip’ which Sam said was still in its early stages, it looks like it’s going to be a busy year for the Monster rider.

Most exciting of all though is the news that Sam will be back on the tour trail trying to reclaim his crown. We can’t wait to see the rider shredding again on the big stage.

Four Words: Danny MacAskill’s New Film. You Know What To Do…

Are your eyes hungry? This one's a visual feast. Viva Mexico!

In the build up to COP26, MacAskill proves he really has got a head for heights

Are your eyes hungry? This one's a visual feast. Viva Mexico!

In the build up to COP26, MacAskill proves he really has got a head for heights

Its like a normal mountain bike edit except, well, everyone's got their kit off

If you're after a big adventure on two wheels, look no further than Valais

6 of the Best Mountain Biking Routes In Valais