This isn’t the first time we’ve discussed this, and it probably won’t be the last time, but what the hell is it with Russians and doing mad stuff on an almost daily basis. Is it dietary? Is it something in the water? Is it all a part of Putin’s propaganda machine? Is it a self-fulfilling prophecy? Seriously. What is it? ‘Russians doing mental shit on YouTube’ is basically about 25% of the internet these days (with the other 75% a mixture of pornography, cat videos, and minion memes); and, quite frankly, we want answers.

In the last week, 23-year-old Russian Instagram model Victoria Odintcova has found herself in trouble with Dubai’s law enforcement after a video of her hanging by one hand from the 1,004-foot tall Cayan Tower went next level viral. In the horrifying footage, which you can watch below, Victoria can be seen lowering herself over the edge with the aid of a blonde-haired assistant. She has reportedly since been asked to sign a pledge, put on the table by Dubai police, stating that she will not be putting her life in danger again.

If this story has put you in the mood to watch other videos of Russians putting their lives in danger up tall buildings, here’s Oleg Cricket almost riding his BMX off the top of a skyscraper. 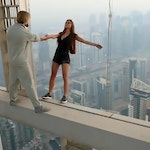 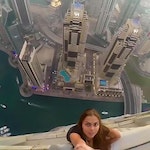 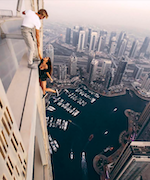 article awe fear surprise Travel video
We use cookies on our website to give you the most relevant experience by remembering your preferences and repeat visits. By clicking “Accept All”, you consent to the use of ALL the cookies. However, you may visit "Cookie Settings" to provide a controlled consent.
Cookie SettingsAccept All
Manage consent