Who is Jaleesa Vincent? It’s a fair question, especially if surfing isn’t your thing and you’ve just sort of drunkenly stumbled across this article. In short, Jaleesa is a surfer, a singer, a lyricist, a tap dancer, a visual artist, a wearer of hats and someone who doesn’t look completely insane wearing a bikini and tailcoat combination.

The film below, directed by Dom Sullivan and presented by Billabong, is well worth a look. Jaleesa herself created the extremely rad animation that bookends the film and, as if that wasn’t enough, her excellently-named band Cupid and the Stupids, performed the live soundtrack. 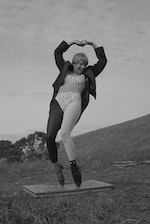 Having stayed at home for the first parts of the End of the Land series – episodes that featured on Seb Smart and Mike Lay – it’s cool to see the crew go further afield here. Jaleesa’s neck of the woods is the Byron Bay area on Australia’s east coast. It’s a place where the local points and beachbreaks are tailor-made for her joy-filled and idiosyncratic lines. She’s no stranger to violently pitching lips either.

Jaleesa describes Cupid and The Stupids (C.A.T.S. for short) as “just a shitty rock ‘n’ roll band that writes love songs.” Recent releases include titles like “There Ain’t Nothing Lame About Love Baby” (an EP recorded live on Valentine’s Day) and “Why Release a Single When You Can Release a Couple?”

On the subject of her music, the closing song in this film is built around the simple, yet infectious, refrain: “Just send me a love letter, or whatever.”

There’s no denying Jaleesa is an artistic, highly creative, type. Her artwork spans the mediums of painting, sculpture, computer and graphic illustration. She cites surrealists such as Salvador Dali (the one with the moustache) and Frida Kahlo (the one with the eyebrows) as two of her biggest influences.

Connected By Water | The Story Behind The Big Wave Safety Movement

Action Sports video
We use cookies on our website to give you the most relevant experience by remembering your preferences and repeat visits. By clicking “Accept All”, you consent to the use of ALL the cookies. However, you may visit "Cookie Settings" to provide a controlled consent.
Cookie SettingsAccept All
Manage consent