Expensive, long queue times, exploited workforce. We could be talking about Disneyland Paris. We’re actually talking about Everest, the world’s highest mountain and, probably because of that status, arguably its worst mountain as well.

This week, a photo taken of a “human traffic jam” just beneath the summit of the mountain has gone viral (see above). It looks like the kind of mad queue you’d get at a theme park, or a particularly busy post office, not on the planet’s highest mountain, above 8,000 metres, in what is cheerfully known as the “death zone”. It’s an obscene image, a symbol of how intense man’s obsession with this mountain has become, the endless dick swinging competition of “climbing the big one” writ large.

“Expensive, long queue times, exploited workforce. We could be talking about Disneyland Paris”

Even more depressingly, it was revealed that the mountain’s congestion had been to blame for the death of three climbers. After waiting in line for more than two hours on the way up, American Donald Lynn Cash, 55, and Indian Anjali Kulkarni, 54, collapsed and died on the descent. Indian woman Kalpana Das passed away in similar circumstances.

All this has brought discussions around the over-commercialisation of the mountain into sharp focus, and with good reason. Guiding companies, it seems, have turned what should be an impressive mountaineering feat into an exercise in “If you’ve got the cash, we’ll get you up there.” What this has effectively led to is a procession of people chancing their arm for a shot at adding ‘climbed Everest’ to their LinkedIn profile, in the vague hope it’ll make them stand out in the world of investment banking. It also means that those guiding companies are accepting vast sums of money from climbers, knowing full well about these high-risk queues happening at the cruising height of passenger planes.

There is, of course, a permit system in effect whereby prospective climbers in Nepal and Tibet must prove they have the required experience to climb Everest. However, the extent to how well this is enforced on either side of the border remains open to debate. What is clear, and beyond doubt, is that Everest is in an absolute state right now. Too many people trying to climb it, too much rubbish being left behind, too many avoidable deaths. It’s all got too much. In fact, if we stop and think about it for even a second we’ll see it’s been getting too much for a while now.

“Too many people trying to climb it, too much rubbish being left behind, too many avoidable deaths”

Take the incident last year, for example, where a team of climbers left $50,000’s worth of cryptocurrency on the summit as part of a marketing ploy for the California-based ASKfm. Putting aside the fact they did this in Nepal, one of the world’s poorest countries – a country where 25% of the population live below the poverty line on $0.50 a day and five million people are undernourished, the whole act itself just reeked of tacky capitalism.

Local sherpa guides, by the way, risk their lives in exchange for somewhere between $2,000 and $5,000 over the course of a season. And while this is much more than the average monthly salary in Nepal of $48, the farting away of $50,000 by an American company puts the sherpa earnings into the spotlight and raises fears over exploitation and inequality. Surely a better use of that money would have been to donate it to a good cause in the area although whether that would have had the same shock value, which spreads so quickly on social, is questionable. 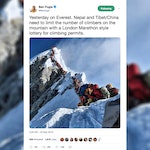 Television personality Ben Fogle, who climbed the mountain in 2018 in tribute to his stillborn son, shared the controversial “human traffic jam” picture, tweeting: “Nepal and Tibet / China need to limit the number of climbers on the mountain with a London Marathon style lottery for climbing permits.”

While many of the reactions to Fogle’s tweet focused on the ludicrous nature of the Everest situation, with comments such “Imagine climbing all that way just to stand in a queue…” and “World record for the highest conga.” Some other people in the thread suggested Fogle was guilty of hypocrisy after climbing it recently to such wide media exposure. “Wish you had campaigned before you did it. Talk about pull the ladder up,” tweeted Michael Smith, while Simon Dennis replied with “Now that you’ve had your go…? This has long been a problem.”

“It’s done. Completed. Leave it alone. Climb something else”

In the context of today, a time in which climbing it simply isn’t as impressive as it once was, it can be tricky to see through the fog of history back to an era when summiting Everest was seen as the ultimate. The legend of George Mallory, and the “did he summit” mystery of 1924, the first ascent by Sir Edmund Hillary and Tenzing Norgay in 1953, and more recently Reinhold Messner’s first solo ascent without supplemental oxygen in 1980; these feats still stand tall as iconic achievements in mountaineering.

For people climbing Everest today however, in the year 2019, what is the actual point? It’s done. Completed. Leave it alone. Climb something else. Being part of an endless wave of climbers clogging up the arteries of one of nature’s most incredible wonders, who leave behind tonnes of waste in their wake (things have got better since Nepalese authorities implemented a $4,000 rubbish deposit refunded if climbers bring down at least 8kg of waste but it’s still not great up there), serves absolutely no purpose whatsoever.

There are plenty of other genuinely incredible mountains in the Himalayas, and the rest of the world for that matter; all of which are amazing in their own right. With that in mind, perhaps it’s time we take our thirst for summiting stuff elsewhere and stop adding to the waiting time of Earth’s deadliest queue. After all, when everyone in the world has climbed Everest… what makes it interesting?

anger article Everest sadness
We use cookies on our website to give you the most relevant experience by remembering your preferences and repeat visits. By clicking “Accept All”, you consent to the use of ALL the cookies. However, you may visit "Cookie Settings" to provide a controlled consent.
Cookie SettingsAccept All
Manage consent